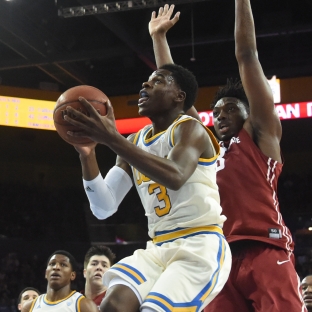 College basketball: 6 players who are an improved skill away from stardom

Frank Mason enrolled at Kansas as a speedster with an inconsistent jumper. By his senior year, he shot 47 percent from 3 and won the Naismith.

This offseason, players all over the country have been spending hours in the gym honing skills and learning others. Offseason development is crucial to a player’s progress and to a program’s success.

With that in mind, here are six players who are an improved skill away from reaching new heights:

Pinson does almost everything on a basketball court. Labeling him merely as a glue guy would be an insult to his athleticism.

Pinson was the perfect puzzle piece to slide between Joel Berry and Justin Jackson, both of whom became elite shooters as juniors. They allowed Pinson to do what he does best: attack closeouts, slither across the baseline for putbacks and dump-offs, and cut to the hoop like a mad man. Pinson does everything 100 mph. That’s especially important on defense. Pinson brings a blue-collar mentality to a UNC program that has lacked toughness in the past.

While Pinson covered up for the weaknesses of Berry and Jackson, they did the same for him. Pinson is a career 27 percent 3-point shooter and made a career-low 24 percent as a junior. He won’t be expected to fill Jackson’s offensive role alone. But for the Tar Heels to sniff a repeat run, Pinson is going to need to help bridge the gap. Shoot 33 percent or so from distance, and that’s huge. He does everything else so well.

It won’t happen with Berry in the mix, but Pinson could run a team at a high level if necessary. He averaged 3.7 assists as an off guard. He also averaged 4.6 rebounds, which is impressive for any wing. But it’s particularly noteworthy to do so on North Carolina, which features a massive front line. His defense, of course, is pristine.

He shot 70 percent from the free-throw line last year, a career high. If he can make similar progress behind the arc, the Tar Heels will be the big beneficiaries.

Moving Edwards to the four and breaking up the Isaac Haas-Caleb Swanigan jumbo package worked wonders for Purdue’s offense last season. Edwards shot a sizzling 42 percent from 3 and was versatile defensively. He can hang with the big boys and can switch onto eager guards looking to exploit a mismatch. At 6-foot-8, 225 pounds, he’s useful in any situation.

The proof was in Purdue’s win totals. Yes, Swanigan’s improvement had plenty to do with this, but Purdue won more games with a Swanigan-Edwards front line than an A.J. Hammons-Swanigan frontcourt the year prior. Oh, and Hammons was awesome. He averaged 24 points and 13 boards per 40 minutes as a senior. But the fit with Biggie was clunky.

Still, Edwards can improve this year. He’s more athletic than most of the power forwards who guard him, so he can capitalize on that mismatch more often. Step 1 of playing the small-ball four is to be a great shooter. He is that. Step 2 is to use your athleticism to penetrate and make plays for others.

We’ll see if Edwards has that in his bag. A whopping 76 percent of his scoring came from 3-point range as a junior. He averaged 12.6 points a game, but throw a couple of drives in there, and he could average 16. With Swanigan gone, he’ll have more chances.

The closest thing to Malik Monk in the SEC last year, Allen is a microwave. He led the Gators in scoring on 37 percent 3-point shooting. His offensive outbursts were memorable. Allen hung 35 on Wisconsin in the Sweet 16. He scored 26 against South Carolina on seven shot attempts. Allen is a modern scorer, doing most of his damage behind the 3-point arc and at the free-throw line.

He plays a different style than his teammates, which is good. Florida is disciplined, but could stand to take more risks. That’s Allen’s role. He’s an efficient gunner, which is rare. Considering the degree of difficulty, it’s a miracle Allen made almost 40 percent of his 3s.

The next step is creating offense for others. Allen had only seven more assists than turnovers (53 to 46). He has the jets to get to the rim at will, but he’s predictable upon arrival. Defenses can collapse because he’s likely not dishing to a teammate. At 6-foot-2, that makes finishing over length even harder.

In his defense, Allen was playing with two solid point guards last year in Kasey Hill and Chris Chiozza. Hill is gone, so Allen will have more playmaking opportunities.

Perhaps Allen was simply doing what he was told last season, focusing on scoring. But Florida will need more diversity from him as a junior. If he’s up to the task, the Gators will be formidable once again.

Lonzo Ball received the bulk of the UCLA headlines last year. He was an incredible player. Once that was acknowledged, we’d say, “Don’t forget T.J. Leaf and Bryce Alford. They’re awesome, too.”

All true. Holiday also belonged in that discussion.

The younger brother of the NBA’s Jrue and Justin Holiday was an efficiency monster as a sophomore, shooting 41 percent from 3 and 54 percent from 2. His true shooting percentage was 61. With Ball and Alford gone, Holiday will be the Bruins’ primary offensive creator. Is he up to the task?

His assist numbers have been solid. He averaged four as a freshman and 4.4 as a sophomore. But Holiday sometimes has been careless with the ball. He led UCLA in turnovers two years ago and finished .1 behind Ball last season. Considering how much more Ball ran the offense than Holiday, that’s worrisome.

Holiday is a high-level shooter and passer. He has a ton of skills. If he can become a killer pick-and-roll guard who doesn’t waste possessions, UCLA will be better than people think.

Georgia Tech is fascinating. No team had a bigger difference between its offense and defense last season. The Yellow Jackets finished 259th on O and sixth on D.

Lammers is a defensive terror. He swatted 3.4 shots and notched 1.2 steals per game. Georgia Tech’s perimeter guys were good, but Lammers is so impactful that you could flank him with four of the worst defenders in the country and still field a respectable defense. He cleans up that many mistakes.

“If he doesn’t play well, it’s almost impossible for us [to win],” Georgia Tech head coach Josh Pastner said last year. “We need him to be really good for us, game in and game out.”

Lammers’ offense came along, too. He averaged 14 points on 52 percent shooting. His offensive game is kind of like his defense. He’s stronger, smarter and wants it more than his opponent. That’s a recipe for success.

But Lammers could become a megastar if he extended his range, similar to former Indiana center Thomas Bryant. He took only two 3s last year, but he seems capable of taking more, given his solid mid-range jumper and his respectable free-throw percentage (74). Lammers is a good back-to-the-basket player who gobbles up offensive boards and is a constant lob threat. If he expands his game, he could score 20 a night.

Georgia Tech doesn’t need to be amazing on offense to make the NCAA tournament. It just needs to be average, considering its defense.

If Lammers adds to his offensive arsenal, count on that to happen.

Lammers and Lynch might be the two best rim-protectors in the country. Both are cinder blocks that prop up their defense whenever needed.

Minnesota plays a hyper-aggressive defensive perimeter scheme because of Lynch. Without him as the last line of defense, the Golden Gophers wouldn’t feel comfortable gambling for steals and picking guys up at half court. When the fear of getting beat off the dribble vanishes, it opens up possibilities. Foes shot a measly 31 percent from 3 against Minnesota thanks to its airtight style. Lynch averaged 3.5 blocks a game.

He’s fine offensively, albeit clearly limited. Lynch averaged only six shots a game last year. He’s every bit the defensive player Lammers is, but the Gopher center is a watered-down version on offense. Lynch will catch some lob dunks and mooch garbage points, and he’s a rock-solid screener. But he’s not a guy you’ll dump the ball in to when the shot-clock is winding down. Lammers should extend his range, but he’s an effective post scorer. Lynch needs to walk before he runs.

Minnesota ranked 22nd offensively and 77th defensively last season. Its style was grinding out wins. Lynch’s game is an apt representation of the Gophers’ style.

If they can improve 10-20 spots in the offensive rankings, we’ll be talking about them being dangerous in March. To do that, Lynch doesn’t need to become former Duke stud Jahlil Okafor on the block, but he can become ex-Villanova big man Daniel Ochefu. In other words, the offense doesn’t need to revolve around Lynch. But it should be able to count on him for a tough bucket underneath when needed.

We’ll see how much Lynch was working on that in the offseason.