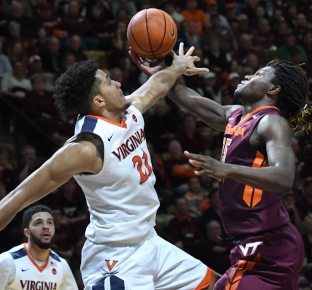 Here are six guys who make a bigger impact on the floor than you might realize.

Mathias is the kind of player every contender needs: someone who can impact the game without dominating the ball. Mathias does “the little things” so well that they’re not little things at all. They’re quite noticeable.

He’s an ace 3-and-D guy; Mathias canned 45.3 percent of his 3s last season and routinely hounded the opponent’s best scorer. His traditional numbers were modest – Mathias averaged 9.7 points and 3.9 rebounds. He was fifth on the Boilermakers in scoring.

On defense, Mathias is a menace. He’s technically sound and tougher to move off of a spot than you think. Mathias ranked second on Purdue with 1.8 defensive win shares last season.

He’s never going to average 20 points or grab a ton of rebounds. But Mathias is extremely valuable. It may not show up in the traditional numbers, but his impact is impossible to ignore via the eye test and advanced metrics.

Perkins earned the least notoriety of Gonzaga’s starters last season, but he was a key piece: a ball-mover, shooter and secondary playmaker that kept the offense humming. Part of the reason why the Bulldogs had the best season in program history was because they didn’t have any weak links. While Perkins lacked the starpower of some of his teammates, his consistent competence allowed them to thrive.

As a sophomore, he averaged 8.1 points and 3.1 assists. But like Mathias, he was efficient. Perkins shot 40 percent from 3.

When Nigel Williams-Goss is in the fold, you run the offense through him, which is what Gonzaga did. It’s also the reason why Perkins took a back seat.

Two-point guard lineups are en vogue in college basketball these days. Make no mistake: Williams-Goss was better than Perkins. But having two starting-caliber guys can juice the offense; when you don’t know who’s going to have the ball on a given possession, you became much less predictable than the typical team.

With Williams-Goss gone, Perkins will shoulder more responsibility, like he did as a freshman. Perkins averaged 10.1 points that year. He’s likely not going to be a star as a junior, but his unheralded solid play could be a reason why Gonzaga has another productive season.

Bridges will have more on his plate this season with Josh Hart gone, but up to this point, he’s been a complementary piece.

Once an undeveloped project, Bridges has turned into a defensive whiz with a better-than-you-think offensive game. He seems ready for more opportunities on that end, but even if those don’t come, Villanova has an A-level defender who can hurt an unsuspecting defense. He made 39 percent of his 3s as a sophomore.

MORE: Which preseason All-American could win the Naismith?

Outside of Jalen Brunson, Bridges is the Wildcats’ most important player, but he’s never averaged more than 10 points per game. He’s Villanova’s best defender by a significant margin – opponents scored 93.3 points per 100 possessions with him on the floor last year. Besides Hart, no other Wildcat regular posted a mark below 96.

Bridges allows Jay Wright to get creative with his defensive schemes. Let’s say Villanova is facing Xavier and Trevon Bluiett. Brdiges, a 6-7 athletic gem with a 7-foot wingspan, is the perfect Bluiett disruptor. If the Wildcats are playing a team with a good frontcourt and an unproven backcourt, Wright likes to apply soft full-court pressure. Bridges spearheads the press; his length and instincts can generate easy points for the Wildcats.

Bridges is probably going to score more this season. But even if he doesn’t, he’s an extremely valuable piece for Villanova. He’ll be sorely missed whenever he leaves.

Lattin can anchor a defense, which gives him a high floor. Despite only averaging 5.2 points for his career, he’s blocked 2.1 shots per game in each of his last two seasons.

Like Perkins, Lattin was the least-known starter on a Final Four team. He played alongside the likes of Buddy Hield, Ryan Spangler and Isaiah Cousins, but Lattin was a key member of that group.

That year, four Oklahoma starters posted a defensive rating of 100 or higher. Lattin’s was a miniscule 94.9; he was easily the best defender on the team. It’s worth mentioning: Lattin was the worst offensive player in the lineup, but he’s still useful on that end. He has elite athleticism and is a prolific dive man on screen-and-rolls. Leave him unattended rolling to the hoop, and he’ll sky for dunks all night.

Lattin has limitations, of course. He doesn’t shoot from beyond the paint. He doesn’t post up.

But hey, there’s no more efficient shot in basketball than a dunk. Lattin’s explosiveness allows him to get in dunking range far more than the average player, and we know what he brings on defense. He should have a big senior year for the Sooners.

Virginia is stocked with these kinds of guys since it plays at a snail’s pace, but Wilkins stands out as someone who doesn’t get the attention he deserves.

Wilkins isn’t a scorer – he averaged 6.8 points last year. And yet, Virginia’s offense was at its best with him on the floor. The Cavaliers scored 117.6 points per 100 possessions with Wilkins in the game, tops on the team. You’d think that billing would be reserved for players like London Perrantes and Kyle Guy, who were Virginia’s two primary shot creators.

Turns out, those guys benefitted from having college basketball’s best screen-setter freeing them up for open looks. Wilkins is rock-solid; Virginia uses curl screens as well as anyone in the country, and Wilkins is the main reason why that play works. He understands angles as well as anyone.

He’s also a prolific offensive rebounder. Wilkins retrieved 11.7 percent of the Hoos’ clanks, which also led the team. Defensively, he’s an ideal fit in Tony Bennett’s system. His combination of physicality and intelligence makes him a plus on that end.

If you recall, Oregon got off to a rocky start last season despite making the Final Four. The Ducks found their stride once Pritchard saw more playing time.

He’s savvy beyond his years. Like textbook screen-setting, ball security isn’t sexy. But Pritchard is the ultimate caretaker; he averaged just 1.4 turnovers in 28.5 minutes per game as a freshman. That meant more possessions, which meant more shots for studs like Dillon Brooks and Tyler Dorsey.

Pritchard does nothing spectacular, but he does everything pretty well. He shot 35 percent from 3, a mark that should rise with experience. He left most of the playmaking to Dorsey and Brooks, but he could drive for a bucket or dish to an open teammate when necessary. Pritchard held his own on defense, too. Just look at some of the guards Oregon faced in last year’s tournament. He was unfazed guarding guys like Derrick Walton, Frank Mason or Joel Berry.

Dorsey, Brooks and Jordan Bell are gone. Pritchard is going to have to shoulder more of an offensive load. We’ll see if he can make a jump – but at the very least, he’s proven he’s a steady point guard. Pritchard is a player you can trust with the ball late in games.

Look around college basketball, and there aren’t a ton of those guys.