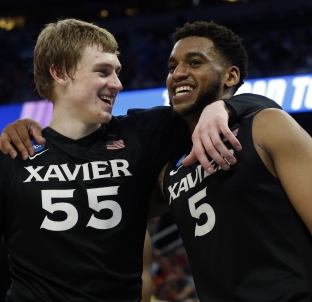 Two years ago, Syracuse went 19-12 in the regular season. The Orange went 9-9 in the ACC, lost their lone conference tournament game, and entered the NCAA tournament losing five of their last six.

They’d go on to make the Final Four, downing teams like Gonzaga and Virginia along the way. We don’t get a surprise Final Four team every year. But it happens often enough that it’s fun to try and predict the next one.

You shouldn’t expect any of the teams below to make the Final Four. But don’t be shocked if it happens.

But this team is experienced, and good. Seton Hall returns its top four scorers from a 21-win group, including Angel Delgado, who averaged 15.2 points and 13.1 rebounds last year. Delgado, Khadeen Carrington, Desi Rodriguez and Myles Powell combined to average 58.6 points and 23.6 rebounds. Not even Villanova, the clear Big East favorite, returns that kind of veteran firepower.

Every 2017 Final Four team had a veteran star and other upperclassmen contributors. Oregon paired Jordan Bell and Dylan Ennis with Dillon Brooks. Gonzaga had Jordan Mathews and Przemek Karnowski to go with Nigel Williams-Goss. South Carolina had Duane Notice to complement Sindarius Thornwell, while Justin Jackson and Joel Berry were both studs for North Carolina.

The point here is that Delgado is as good, if not better, than the names mentioned above, while Carrington and Rodriguez are ideal secondary pieces.

Seton Hall checks every box. The Pirates could win 25-plus games this year based on development and continuity.

We’ll see if it translates to March success. That’s eluded them lately.

On one hand, A&M barely finished above .500 last season and went 8-10 in an SEC. Final Four aspirations seem lofty.

On the other, the Aggies are just so talented. In a schoolyard pick, you could count the number of guys that would be taken before Robert Williams on one hand.

Williams is a unicorn. He blocks shots. He has a feathery touch from mid-range; if he can extend his jumper out to 3-point land, pity the foes who have to defend him. Williams skies for acrobatic dunks, can defend five positions, and improves by the game. It’s accurate to say he’s a building block. It also undersells his talent. In the right situation, he can be transcendent.

It’s puzzling that a team with Williams, Tyler Davis, Admon Gilder and DJ Hogg only won 16 games. All averaged double-figures. From a talent standpoint, you’d put those four up against just about any top four in America.

But at some point, you have to, like, win. Texas A&M’s biggest problem last year was its lack of a true floor general. Davis and Williams form one of the best fronctourts in the land, but they can’t pass the ball to themselves. It’s like having an elite wide receiving core in football with a subpar quarterback. For as good as Davis, Williams and Hogg are, their skillsets are reliant on a point guard who can create shots.

That’s why Marquette grad transfer Duane Wilson was a huge get for Texas A&M. He’s averaged double digits twice in his career. Gilder struggled to embrace the lead ball-handling role. With Wilson in the fold, they can share those duties.

Wilson is no superstar, but he’s a competent SEC guard. Sometimes, what seems like a minor jolt can have a major impact on a team’s ethos.

Play the Bearcats on a Thursday night, and you’ll feel it on Friday morning. These dudes are mean, and hungry. Cherish your buckets against them. Cincinnati held 18 opponents under 60 points last season.

Most of its key cogs return with the exception of point guard Troy Caupain. The Bearcats are fresh off a 30-win season and return four of their top five scorers. In most years, we’d pick them to walk to the AAC title.

But Wichita State is the story of the league going in. The Shockers have escaped “darkhorse” Final Four territory; they’re a popular semifinal pick. Rightfully so. They return every starter from a 31-win team.

That has to motivate guys like Jacob Evans, Kyle Washington and Gary Clark from Cincinnati. The Bearcats won one fewer game than Wichita State and advanced just as far in the tournament…. and Cincinnati played in the better conference. The Shockers may be a top-five team when the AP preseason rankings come out; the Bearcats won’t be anywhere near that.

Cincinnati has a dangerous combination of talent, infrastructure and motivating fuel. Watch out.

It’s going to be a fun season in The Queen City. The reason to like Xavier is the same reason you should like Seton Hall: talent combined with experience. The Musketeers return their two best players from an Elite Eight team and add some dynamic freshmen to the mix.

We knew Trevon Bluiett was good going into last year’s tournament, but he blossomed into “great” before our eyes. Bluiett had help, but Xavier doesn’t sniff the second weekend without him. The burly swingman scored 20-plus in wins over Maryland, Florida State and Arizona. He’s the most polished scorer in the Big East.

It looked like Xavier might be doomed when Edmond Sumner tore his ACL last season. In the few games after, the Musketeers were lost. But Quentin Goodin came on strong down the stretch; he’s ready to assume the point guard role from the jump this time around. J.P. Macura was born to be a dynamite second option who infuriates opponents. Kaiser Gates does the dirty work, taking the toughest defensive assignments so Bluiett can rest up and unleash fire on offense.

Chris Mack is one of the best coaches in the game and has plenty to work with. Xavier has a shot to get over the hump.

Minnesota’s disappointing early tournament exit shouldn’t diminish its accomplishments. The Golden Gophers improved their win total by 16 from two seasons ago to last. They went undefeated in February and finished as a top-25 defense.

Plenty returns. Reggie Lynch is a brick wall; he averaged 3.5 blocks. There’s no better defensive anchor in the Big Ten. Get a little courageous, and you could argue Lynch is the best rim protector in the country. Amir Coffey averaged 12.2 points on high efficiency as a freshman and could eclipse 15 as a sophomore. Minnesota returns five of its top six scorers.

Here’s the concern: while Minnesota returns its top scorers, that end of the floor was its weakness. The Golden Gophers ranked 77th in offense last season, but they were young. Nate Mason led the team in scoring, but shot 38 percent from the field. Minnesota only hit 34 percent of its 3s as a team, which ranked 200th.

But we know the defense will be stout. The offense doesn’t need to be superb to make a run – it just needs to be solid. Mason can raise his efficiency. Coffey can be more assertive. Minnesota can make more of an effort to get Jordan Murphy involved; he averaged 11 and eight on 50 percent shooting.

It’s not far-fetched to say the Golden Gophers can finish with a top-50 offense and a top-10 defense. Peak in March, and who knows? These guys could make noise.

The Steve Vasturia and V.J. Beachem losses will hurt, but no ACC team returns as accomplished of a duo as Matt Farrell and Bonzie Colson. Farrell is on track to be as good as Jerian Grant and Demetrius Jackson were. Colson maximizes his talent more than perhaps anyone in the country. Ask yourself: Should 6-6, 225-pound forwards be averaging 18 points and 10 boards per game?

To be blunt, no. Colson does it anyway, and averaging 20 and 10 is in play as a senior. Two senior All-ACC candidates can take you a long way. The question with Notre Dame is its depth.

Temple Gibbs, Rex Pflueger and Matt Ryan will need to step up. Remember, Farrell was an afterthought while playing behind Jackson and Grant, so Mike Brey has a proven track record of developing bench players. Gibbs is a speedster that can feast on scrambled defenses if he serves as Farrell’s secondary creator. Pflueger and Ryan can stroke it; they hovered around 40 percent from 3 last season.

Notre Dame has made two Elite Eights in the past three years. Get enough spins at the wheel, and they’ll make a Final Four. This year’s group has a chance.