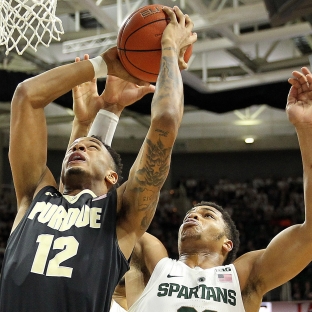 The Big Ten released its men’s basketball conference schedule Wednesday afternoon, giving fans an idea of what their teams’ schedules look like December through February. Conference play starts earlier in the calendar for the Big Ten this year, meaning every team will play two conference games – one at home and one on the road – between Dec. 1 and Dec. 5.

Here are five Big Ten matchups all basketball fans can look forward to this season.

On the opening night of conference play, in-state foes Illinois and Northwestern will meet in Evanston, Ill. The Wildcats are coming off of their first NCAA tournament appearance in school history, while the Fighting Illini will travel a few hours north for the first Big Ten game of coach Brad Underwood’s tenure at Illinois.

Northwestern returns its top five scorers from last season’s 24-win team, led by senior point guard Bryant McIntosh at 14.8 points per game. Last year, the Wildcats finished two wins and three spots in the conference standings ahead of the Fighting Illini, but Illinois swept Northwestern in the season series. Illinois must replace the production of four of its five leading scorers from last season, making redshirt junior forward Leron Black the team’s leading returning scorer at 8.1 points per game.

Minnesota had a breakthrough season in 2016-17, finishing fourth in the Big Ten with a 24-10 (11-7) record on the season. Penn State could be this season’s version of Minnesota. The Nittany Lions didn’t have any seniors in their rotation last year and their top two scorers were freshman guard Tony Carr (13.2 ppg) and forward Lamar Stevens (12.7 ppg). That Penn State duo, along with Minnesota’s 6-8 sophomore guard Amir Coffey (12.2 ppg, 3.8 rpg, 3.1 apg), have trajectories to be All-Big Ten players in the future.

A look inside the gym last week at practice. https://t.co/TzGcLAZiyG

This game highlights two of the bigger questions in the conference:

What do the Golden Gophers have in store as an encore to last season?

Can Penn State make a leap in the conference standings?

The in-state rivals only meet once this season, making the stakes of this game even bigger. New Indiana coach Archie Miller will be introduced to the rivalry at home inside Assembly Hall, where defending Big Ten champion Purdue won 69-64 last season. The Boilermakers swept the Hoosiers in their 2016-17 season series and they have won five of the last six meetings, dating back to 2014.

Top 10 in attendance 39 out of the last 45 years. Pat yourselves on the back, Hoosier Nation.

Purdue lost Caleb Swanigan to the NBA but it returns its next six leading scorers from last season, including 7-2 center Isaac Haas and versatile forward Vince Edwards, a pair of seniors who both averaged 12.6 points per game last season. Indiana will rely heavily on a pair of seniors – Robert Johnson and Josh Newkirk – in its backcourt and sophomore De’Ron Davis in the frontcourt.

In a game that could prove to be pivotal in determining the Big Ten regular season champion, Purdue visits Michigan State late in the regular season for the lone scheduled matchup between the two schools. Michigan State’s talented sophomore class, led by forward Miles Bridges, features four of the Spartans’ five leading scorers from last season. Plus, they’ll get a boost from veteran forwards Ben Carter and Gavin Schilling, who both missed last season due to injuries. Both teams boast a bevy of outside shooters and intimidating frontcourts. The Boilermakers won both meetings last season by double-digit margins but the Spartans will have the homecourt advantage next spring.

Ladies and gentlemen, your #SpartanOfTheWeek:@MilesBridges01. Comment your questions and he’ll answer a few tomorrow https://t.co/teY2KCPGOn

Both the Wolverines and Terrapins are forced to try to replace accomplished veteran point guards this season. Derrick Walton Jr. carried Michigan to a Big Ten tournament title in March, while Melo Trimble powered Maryland to a combined 79-25 record in his three seasons in College Park. Ohio transfer Jaaron Simmons and sophomore Anthony Cowan are the incumbent floor generals for each school, respectively.

This could be an important game in the Big Ten standings that takes place on the second-to-last day of the conference’s regular season schedule. Michigan’s Moritz Wagner (12.1 ppg, 4.2 rpg, 39.5% 3-point) and Maryland’s Justin Jackson (10.5 ppg, 6.0 rpg, 43.8% 3-point) are two candidates to be breakout players in the Big Ten.