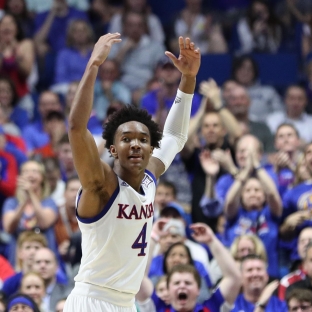 College basketball: 5 Big 12 games that you need to watch this year

Kansas has won at least a share of the past 13 Big 12 regular-season championships, a stunning accomplishment considering how deep the conference is. The Big 12 sent six teams to the NCAA tournament last season.

The Jayhawks are still the team to beat. So, naturally, they’re featured in several marquee games.

Here are five matchups to watch this season in the Big 12:

At first glance, Kansas vs. Texas feels like a mismatch. The Jayhawks are more talented. Guard Frank Mason is gone, but Devonte’ Graham and Malik Newman should form one of the top backcourts in America. Texas made the NCAA tournament in Shaka Smart’s first year, but missed the dance in his second one last season.

Beating Kansas is a chore. But early in the conference schedule, the Longhorns have a chance to clip the reigning conference champs. Bamba gives Texas a fighting chance because he’s precisely the kind of player KU struggles with. Remember when Oregon’s Jordan Bell blocked eight Jayhawk shots and knocked them out of last year’s Elite Eight?

We don’t know if Bamba has the canny anticipation Bell did, but he has the tools to become that kind of defensive force. The freshman has a 7-foot-9 wingspan. (Seriously.) And by all accounts, he has good instincts and timing around the hoop. If you created a player in a lab that could stifle KU’s drive-and-kick attack, it would be Bamba.

For all of Kansas’ backcourt firepower, its frontcourt is a question mark. Center Udoka Azubuike was promising in 11 games last year, but that’s a tiny sample. Beyond Azubuike, the Jayhawks lack big man depth. A lot is going to fall on that backcourt of Graham and Newman. Both are capable of going for 25 on any given night.

This could be a tough year for Iowa State. Cyclone legend Monte Morris is gone. So is Deonte Burton, who went toe-to-toe with Purdue’s Caleb Swanigan in last year’s dance.

Still, beating Iowa State at Hilton Coliseum is so, so tough. The Cyclones have lost seven conference games there in the past five years. Kansas might have the best home record of any school in recent memory, but Iowa State isn’t far behind.

So it’s going to be tough for a young Texas squad to break through. Yes, Bamba should be awesome. But the Longhorns will need to rely on a trio of guards that, while talented, have been inconsistent. If they play their best ball, you’ll put Andrew Jones, Kerwin Roach and Eric Davis, Jr. up against any backcourt. At the same time, they couldn’t lead Texas to the tournament last year when they had an NBA-caliber center in Jarrett Allen.

Winning at Hilton would be a huge confidence boost for Texas, and specifically, those three. Given everything Iowa State lost, the Horns have a great shot.

Last season, Baylor was ranked No. 1 for a hot second. Then it went to Morgantown, where “Press” Virginia gave the Bears fits.

This is always a fun matchup. Baylor has one of the best point guards in the land in Manu Lecomte. No guards enjoy facing the pesky West Virginia defense, but having a veteran ballhandler is a plus against the Mountaineers. Especially in Morgantown.

West Virginia returns plenty from last year’s bunch, including Jevon Carter and Daxter Miles. Baylor loses All-Big 12 forward Johnathan Motley, which will hurt in the big picture. But against WVU, it’s all about guard play. Despite the Bears’ struggles last year, Lecomte and Jake Lindsey are equipped to handle the pressure. Baylor knocked off West Virginia with ease in Waco later on.

These are two likely tournament teams facing off in a hectic environment. Doesn’t get much better than that.

As mentioned earlier, Kansas is perimeter-oriented, which should suit it well against the Mountaineers.

But we’ve said that about the Jayhawks before, and they still haven’t fared well at West Virginia. In fact, Kansas hasn’t won in Morgantown since 2013. It’s played there every season. The past two years, the Jayhawks haven’t come within 10 points of the Mountaineers away from Phog Allen.

Sure, West Virginia hasn’t won at Kansas, either. But it says a lot about the Mountaineers’ home dominance that perennial conference champ Kansas hasn’t won in Morgantown in four seasons. Think about that.

It also means Kansas doesn’t need to win at West Virginia in order to win the league. But slip up somewhere unexpected, and it could come back to haunt them. This game is must-see TV.

Yes, Kansas is making its third appearance here. When a team is approaching a decade and a half of consecutive conference titles, it’s in every conversation.

Baylor and West Virginia have won at a similar clip lately, but the Bears haven’t had the home luck against Kansas that West Virginia has. Baylor hasn’t beaten KU in Waco since 2013. There’s little reason to think this go-around will be different, besides the fact that Kansas has a weird loss or two every year. In 2017, it was TCU in the Big 12 tournament. In 2016, it was Oklahoma State in Stillwater. Every program is prone to hiccups. Even the kings of the Big 12.

A home win against Kansas would be huge for Scott Drew. The Bears have been solid for a decade, but never formidable enough to be considered a consistent, dominant force. Beating KU is the first step. You know Baylor will be ready.