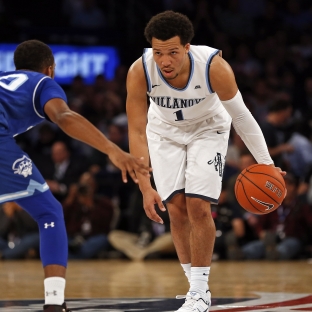 Duke was supposed to run through everyone. Its archrival did instead.

Frank Mason of Kansas was considered a good-but-not-great point guard coming into his senior year. He would take home the Naismith.

Some of the stuff we expect to happen in the 2017-18 season will. Others are possible, but stray from consensus.

We’re trying to pinpoint the latter here. Here is the first half of our 2017-18 bold predictions.

Seton Hall’s Delgado was essentially Caleb Swanigan of Purdue last year without all the hoopla. Check out the numbers:

Delgado was a monster in conference play, averaging 14.1 boards a game. Delgado is 6-foot-10, 240 pounds, which helps. But he also understands angles better than just about everyone on the court. Combine that with a non-stop motor and you get the best rebounder in the game.

Watch this play against DePaul. A Seton Hall guard pushes in transition and throws up a wild floater. Normally a bad shot, right?

Not when Delgado is on your side. When he’s in the game, just about anything you can get to the rim is a worthy shot. Delgado is out of the play here, but sprints to the glass as two defenders converge on the ball-handler. He outhustles everyone and knows exactly where the ball will land:

With another year of experience and a little more playing time, 15 boards per night is in reach.

*Wichita State will lose only one AAC game

We all know Wichita State is good. But how good? Playing in the Missouri Valley, it was tough to gauge their worth when comparing the Shockers to the big boys.

Wichita State is in the AAC now, which boasts the likes of Connecticut, Cincinnati and SMU. Here are the reasons for optimism. First, the Shockers return just about every key piece from a 31-win team. Second, though it was a limited sample size, this group proved it could hang with the best of the best last season.

MORE: 6 guys on the verge of stardom

Wichita State played Kentucky in the second round of the tournament. Kentucky won, but it was one of the most competitive games of March. UK had De’Aaron Fox, Malik Monk, Bam Adebayo and Isaiah Briscoe. The Wildcats beat Landry Shamet, Markis McDuffie, Shaq Morris and the Shockers by three. It could have gone either way. Before that, Wichita State hadn’t lost a game in more than two months.

For most teams, November and December are about jelling and finding the right rotation. Building chemistry takes time. There’s a lot of turnover with most rosters.

Wichita State has a year-plus head start on everyone. By the time AAC play rolls around, it should be firing on all cylinders. Expect a loss at Cincinnati or at SMU. But the Shockers are A) awesome, and B) extremely motivated. Defeats will be rare.

*Miles Bridges will lead Michigan State in scoring, but Nick Ward won’t be far behind

Bridges is most analysts’ pick to win the Naismith. He’s a remarkable talent. But he’s not the only reason why Michigan State is a Final Four contender.

Ward was quietly one of the best freshman bigs in the country last season. He averaged 14 points in less than 20 minutes per game. His per-40 numbers: 28 points, 13 rebounds.

Michigan State is counting on his defensive progress. By all accounts, he improved his conditioning immensely over the summer. If Ward can be average on that end, he could make the All-Big Ten first team.

“The biggest jump you make,” Izzo said, “is between your freshman and sophomore year.”

Ward may not face many post-up threats, but he is one. He might be the best low-block scorer in America. Ward got to the free-throw line 11.5 times per 40 minutes. His endless array of spin moves and jump hooks is nearly impossible to guard. Michigan State struggled to create offense at times, but Ward was an elite bailout option. Dump the ball to him with five seconds left on the shot clock, and something good will come of it.

The Spartans scored 106.6 points per 100 possessions when Bridges was on the floor. With Ward on the floor, that number rose to 110.5, tops on the team. If he hangs defensively, he can average a double-double.

In Big East play, Brunson averaged 16.1 points on 55.9 percent shooting. His true shooting percentage was 67.1. Those numbers would be excellent for a center. Brunson is a point guard. Here are those conference numbers next to Josh Hart’s, who was the Naismith runner-up last year:

Brunson plays top-notch defense at the point of attack. He’s a true two-way player that will run one of the best teams in the country. To be clear, Bridges has a good shot to win the Naismith. Given his dominance as a freshman and how good Michigan State projects to be, the opportunity is there.

But part of the reason Brunson has flown under the radar is because of Hart. Without him, he’ll be Villanova’s clear No. 1 option. Brunson’s efficiency can dip a bit, but if his usage rises (as it should), 20 points, five assists and five rebounds per game is within reach. If he does that and Villanova wins 30 games, that looks a lot like Frank Mason’s Naismith-winning year.

It will be exciting to watch Brunson expand his game as a junior.

Like Ward, he’s a throwback. The mid-range jumper isn’t sexy anymore. It’s an inefficient shot — unless you’re an elite mid-range sniper, which Welsh is. If anything, with defenses focusing on defending the rim and the 3-point line, the mid-range game is becoming a market inefficiency these days. Rain fire from 15 feet and you’ve exploited a weakness.

Because Welsh is so great from mid range, he’s a predictably awesome free-throw shooter. He went 42-for-47 (89.4 percent) last year. He’s not a bruiser, so he won’t get to the line much. But when he does, he’s golden.

This is an admittedly hipster prediction. But as an avid UCLA watcher, it’s surprising Welsh missed five free-throws last season. Taking his likely improvement into account, something like 56-for-60 seems possible.

If you’re a bit of a basketball dork, keep an eye on this development.

*Duke will start slower than expected before dominating the ACC

With a likely starting lineup of Trevon Duval, Grayson Allen, Gary Trent, Wendell Carter and Marvin Bagley, there might not be a more talented team in the nation. But questions linger.

First, Allen is the only non-freshman of that group. Sure, these are all highly touted guys. But will inexperience hurt the Blue Devils early on?

Second, is there enough shooting? Duval does everything at an A-plus level except shoot. We know Allen can stroke it, and apparently Trent can, too. Carter and Bagley are oozing with ability, but neither has reliable 3-point range.

Duke has been ahead of the small-ball curve ever since it used Shane Battier at power forward back in the day. Since then, its best teams have used only one traditional big.

“Coach K makes an effort to recruit that kind of guy who can play both forward spots, because it makes us so much more versatile,” Duke assistant coach Jon Scheyer said last year. “Whether it’s Shane Battier, Mike Dunleavy, Luol Deng, Kyle Singler, Justise Winslow, Brandon Ingram, you need that kind of player in order to play multiple styles well.”

The Blue Devils don’t have that guy this season. Trent is more like Allen or Luke Kennard than he is Jayson Tatum or Justise Winslow. Carter and Bagley are interior forces, but they won’t be stepping out to the 3-point line. If they do, defenses will be doing cartwheels.

All of this is to say, Mike Krzyzewski will figure out this roster. But if Duke looks out of sync in November and December, don’t be surprised. The Blue Devils will face Michigan State in the Champions Classic, Indiana on the road, and will compete in a loaded PK80- Phil Knight Invitational over Thanksgiving. The nonconference schedule is no cakewalk.

Duke could very well win the national title. If it stumbles a bit out of the gate, keep all of this in mind.

*Kansas will win the Big 12 by at least three games

Picking Kansas to win the Big 12 is the opposite of a bold prediction. But to win it by three games? That’s a high bar. Even for the Jayhawks.

Since 2011, Kansas has won the Big 12 by more than two games once. That was last year, when the Jayhawks did laps around the rest of the league and won it by four.

This year, the Big 12 has depth, but there’s no clear challenger to Kansas. Texas is loaded with talent, but it just won 11 games. To say the Longhorns can compete with Kansas would be irresponsible. Baylor looks like a tournament team, but it lost its best player in Johnathan Motley, along with key contributors Al Freeman and Ish Wainright. Oklahoma State lost its coach and its best player in Jawun Evans. Iowa State is without Monte Morris. West Virginia is probably Kansas’ biggest threat, but the Mountaineers are unlikely to take a huge leap.

The Jayhawks lost Mason and Josh Jackson, but Devonte’ Graham returns, and Malik Newman should be an outstanding sidekick. Bill Self has done plenty with rosters less talented than this one.

KU might even be a little worse than it was last year. But there’s no Big 12 juggernaut staring it in the face. It should win its 14th league title in a row with ease.

*Ohio State will be in tournament contention

In 2014, Chris Holtmann took over at Butler after Brandon Miller had to take a medical leave of absence.

Butler wasn’t supposed to be anything that season. It was fresh off a 14-17 year in which it won four Big East games. There was no hot-shot freshman. Roosevelt Jones returned from injury, but to expect an interim coach to lead the Bulldogs to the NCAA tournament in 2015 seemed unrealistic.

But it happened. Butler won 23 games and earned a 6-seed. It was largely because of Holtmann, one of the top Xs and Os tacticians in the game.

Now we look at Ohio State. The Buckeyes are coming off a 17-win season. JaQuan Lyle and Marc Loving, two of their top three scorers, are gone. How could we possibly expect Ohio State to improve?

It’s a leap of faith, but just remember: Holtmann, the new basketball boss in Columbus, has pulled off a crazier turnaround. If Ohio State reaches 20 wins, it will be in the bubble conversation. Jae’Sean Tate, Kyle Young and Keita Bates-Diop is a nice core to build around.

Like Self, Holtmann has done more with less. We could be talking about Ohio State more than we would have thought later this season.