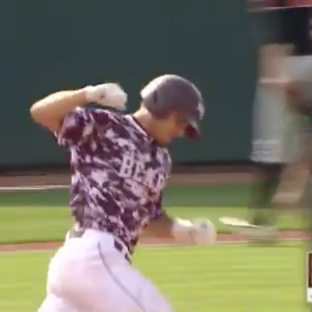 The NCAA baseball tournament regionals are here, and on just the second day of play, we’ve got plenty of action.

In the Fayetteville Regional, Missouri State saw a lead disappear in the top of the 9th as a two-out triple tied the game before a wild pitch led to Oklahoma State scoring the go-ahead run.

But the Bears had some ninth-inning magic of their own.

Down to the last out. Trailing 6-5. A runner on first. Jeremy Eierman at the plate…

Did we mention that was Eierman’s second homer of the game? Yeah, not a bad day.

Still, it was (statisticall) topped by Oklahoma State’s Garrett Benge. Not that it makes the loss any easier to bear, but Benge’s RBI triple in the top of the ninth gave the Oklahoma State junior a cycle in the game — a rare feat in college baseball.

Oklahoma State’s Garrett Benge completes the cycle with a game-tying triple in the 9th! #RoadToOmaha pic.twitter.com/TDkXh7TGna