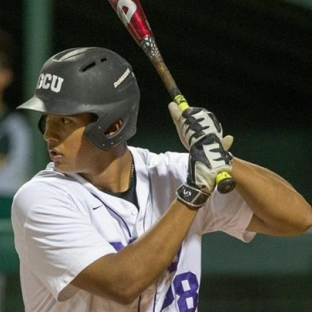 College baseball: The stories behind the most interesting names in the game

The date was Sept. 6, 1995. National attention focused on Baltimore, where Cal Ripken was passing Lou Gehrig’s hallowed consecutive games streak. Seven hundred miles away, outside Chicago, Dan and Katie Parker were celebrating the birth of a son.

The boy needed a name. The parents looked toward Baltimore. Why not?

And so 22 years later, now playing right field for your Butler Bulldogs, Gehrig Parker, a junior hitting .296, is a worthy candidate for this year’s all-name list in college baseball.

“I didn’t really realize how unique it was until I got to school,” Gehrig said. “It really hit me when the teachers don’t even know how to pronounce it.”

Gehrig Parker’s solo shot in the third gave the Dawgs a 4-1 lead. The Dawgs are ready for a trip to D.C. #GoDawgs pic.twitter.com/r3Od9hXgKA

He grew to learn something about the legend.

“Once you’re named after him,” he said, “you do your own research.”

He’s even seen a few minutes of Pride of the Yankees.

And, of course, he’s played in every game this season for Butler. What Gehrig wouldn’t?

You were wondering about the man who passed Lou Gehrig that night? No worries.

Now playing shortstop for your California Bears is Ripken Reyes.

“My dad played college baseball and was a huge fan of Cal Ripken growing up,” Reyes said. “People would ask me where I got my name. I think I finally understood when I was playing baseball. My dad told me just show up at the field and work your butt off and try to be like Cal Ripken. I honestly wanted to be just like him.”

You could tell by the Reyes home.

So getting asked a gazillion times in his life about the name has not been a burden.

“It’s an age-old question. People ask all the time, and I love answering it.” Reyes said. “I couldn’t have been named after a more respected man in the game of baseball. I’ll be happy to tell them every single time.”

It was news to Ripken, a sophomore part-time starter, that there is also a college basketball player out there this season named Gehrig.

Now pitching for your Vanderbilt Commodores is Maddux Conger.

Must have been a big Greg Maddux fan around the house when he was born. “You could say that,” said father Bryan Conger, who has a direct link to baseball as coach at Tarleton State.

Dores lead 6-1 headed to the 5th. Maddux Conger takes over on the bump. pic.twitter.com/V2V7D2oCXo

Officially, his son is Mark Maddux Conger, the first name in honor of Bryan’s late father-in-law. But the sophomore righthander, who is 2-1 in 12 appearances this season, has always been called Maddux.

“He got to where, when he was younger, he watched some film of Greg Maddux, he wanted to know who he was named after,” Bryan said. “There was a period of time where he was a pretty big aficionado of Greg Maddux. He actually asked for, and we got him, a poster of Greg Maddux that he had in his room. The more he watched the Braves as he grew up, he actually thought he was going to be the next Chipper Jones. But once he got a little older and realized he could throw the ball pretty well, he was like, maybe being like Greg Maddux wouldn’t be so bad.”

Bryan’s younger son is named Jacoby, as in Ellsbury. He also has a daughter. Had she been a boy, her name was to be Glavine. No word on if there would have ever been a little Smoltz.

Now pitching for your Northern Illinois Huskies is Ryne Blanton.

He grew up 90 minutes outside Chicago, the son of big Cubs fans, so you can probably guess the source of his name. Yep, Ryne Sandberg.

“When anybody asks for the name, they usually write down Ryan,” he said. “So I have to spell it out for them. A lot of people, if they’re not baseball fans, kind of shrug it off as kind of weird. But people who are baseball fans definitely know where I got it from.”

You haven’t heard the best part yet. His middle name. Say hello to Ryne Wrigley Blanton.

“Nobody ever believes me. I have to show them my Facebook page,” he said. “I love my middle name. It’s one of the most unique middle names you can have. I don’t introduce myself as Ryne Wrigley, but I get amused when I get to tell them my middle name.”

The senior righty – 2-2 this season in 21 appearances – is a blue-blooded Cubs fan. He watched the rain-interrupted Game 7 last fall in anguish.

“I was more nervous with that than any situation in my life,” he said.

He mentioned that it’s a good thing his folks weren’t White Sox fans. His middle name might be Comiskey.

To be included on the all-name list doesn’t not require a baseball connection.

Texas A&M pitcher Lee May Gonzalez, who is not named after the former big leaguer Lee May – though he said he gets asked that all the time – but a combination of his father and grandfather.

There’s Louisiana catcher Handsome Monica. That’s what his mother called him when he was young, but when a private school refused to use nicknames in his eighth grade, his parents made it part of his legal name: Handsome Enrique Ray Monica. He later moved to an all-boys high school, and once told the Lafayette Daily Advertiser, “Handsome probably isn’t the best name to have at a school like that.”

Louisiana Tech’s Parker Bates tries to reach on a bunt; Louisiana’s Handsome Monica with the nice play behind the plate to get the out. pic.twitter.com/qXxialXxFg

There’s Texas A&M – Corpus Christi infielder Itchy Burts. Actually, he’s David. But at some point he picked up Ichiro – maybe because he’s small (5-8) and quick and can handle the bat – and that morphed into Itchy.

There are names varied over from famous fathers. Manny Ramirez Jr. is a senior first baseman – hitting .261 – at San Francisco. Ed O’Bannon III is a freshman pitcher at Pacific. Kacy and Kody Clemens – Roger’s sons – are hitting. 307 and .262 at Texas.

Finally, now catching for your Winthrop Eagles is Babe Thomas.

No, it doesn’t come from that Babe.

“It came from my mom; she started calling me that when I was young. Absolutely no baseball tie,” he said. “But people make that connection all the time. They assume since I play baseball that’s where I get the name from. It’s kind of weird. When people ask me what my name is and I say Babe, there’s a shock on their face.”

Thomas leads the team in homers this senior season with eight, and was co-leader as a freshman and sophomore. The Babe would be so proud.