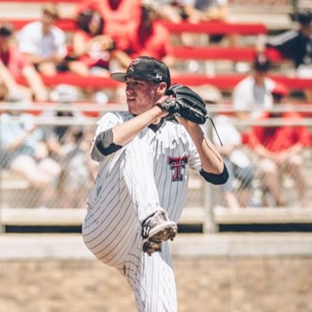 LUBBOCK, Texas – With a strikeout from No. 42, No. 4 Texas Tech baseball swept Kansas, 9-4, to win game No. 42 and claim the program’s second-straight Big 12 regular season championship on Saturday afternoon in front of a sold out senior day crowd at Rip Griffin Park.

It was the sixth conference title in program history and the first time to earn back-to-back regular season crowns. In 1997 & 1998, Tech won the season championship and the tournament title, respectively.

For the second-straight year, the Red Raiders are Big 12 Champions! #WreckEm pic.twitter.com/Ku4UqlET8m

The win also guaranteed Tech the No. 1 seed at next week’s Phillips 66 Big 12 Championship at Chickasaw Bricktown Ballpark in Oklahoma City.

Tech’s pitching staff combined a total of 10 strikeouts for the 23rd time this season, as sophomore Erikson Lanning got the start against the Jayhawks. The Woodstock lefty tossed a total of 3.2 innings, giving up just two runs on six hits, while striking out three. Junior right-hander Jose Quezada earned his sixth win of the year after going 2.0 frames, striking out three. Junior lefty Parker Mushinski polished off the final frame to seal the title.

The Red Raider offense started right off the bat, scoring in the first inning for the third-straight game. Freshman infielder Josh Jung put the first run on the board after an RBI-groundout brought in Little after his first double of the day.

After a quick three-up, three-down the top of the second, Tech tacked on three more runs for a 4-0 lead. A throwing error on a single from freshman catcher Michael Berglund allowed Garcia to scoot home for the first run of the frame. Klein followed with a single to score Berglund, then Little notched his second double of the day to complete the three-run second inning.

The Red Raiders completed the sandwich with another run in the third thanks to an RBI single from Garcia to bring home senior infielder Hunter Hargrove.

Kansas got two back in the top of the fourth, but Tech quickly answered thanks to another single-double combo from Klein & Little, followed by a Jung double to make it 7-2.

The Jayhawks utilized a sacrifice fly in the fifth, but after two scoreless frames, the Red Raiders once again got the runs back along while padding the lead with two runs in the seventh. Three doubles in four at-bats from junior designated hitter Tanner Gardner, Hargrove and senior outfielder Ryan Long kept the line moving and pulled the Red Raiders to a 9-3 lead.

A double in the eighth from KU’s Gragg gave the Jayhawks its final run of the regular season, as Mushinski put the nail in the Big 12 title in the ninth with three strikeouts.

Up next, the Red Raiders will travel to Oklahoma City for the Phillips 66 Big 12 tournament as the No. 1 seed, facing either Oklahoma State or Kansas State in game one on Wednesday, May 24.