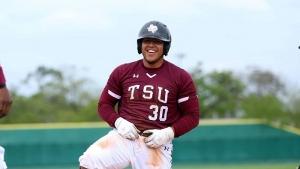 
STARKVILLE, Miss. — Thanks to timely offense and lights-out pitching, the Texas Southern Tigers defeated the No. 8 Mississippi State Bulldogs 8-4 on Tuesday evening. Thanks to this result, the Tigers won their first game of the 2020 season in a big way.

“This is the second-biggest win in the history of the university,” said head coach Michael Robertson. “You’ll (always) remember the win in the [2004] regional against [defending national champion]Rice. This sends a message about the SWAC.”

MORE: No. 2 Florida completes sweep over No. 1 Miami

Five Texas Southern players made up the team’s hit count, with Victor Bueno being the only one with two for the night. He finished his 2-for-5 performance with a run and two RBI.  Besides him were Roderick Coffee and Parker DeLeon with their pair of sacrifice flies which helped the team salvage the win. Nic Garza and Justin Cooper etched in as well for the Tigers, with the former scoring on a fielder’s choice and the latter on an RBI base hit to right. Seven players contributed to the team’s eight total runs, with Reuben Bennevendo the single man out as he scored twice.

The pitching corps played their best stream of baseball of the entire year. Starting pitcher Camden Gaurnere threw for five innings while allowing only three runs with three strikeouts against the #4 Bulldogs. He was supported by Robert Loza with his 3.1 inning, one hit, one run and one strikeout performance. Jesse Garcia recorded the save by striking out the only two batters he faced.

In addition to their maiden victory, this is also their first win against a nationally-ranked opponent this year.

Mississippi State (5-2) seized the issue in the game’s onset and rattled Tigers starter Guarnere by scoring two quick runs in the bottom of the first inning. A sacrifice fly and a reach through a fielder’s choice compiled for the Bulldogs’ early lead at 2-0.

The Tigers charged right back at Mississippi State in the second as Bueno opened with a leadoff single and moved to second after Charles Robinson’s walk. The bases were loaded as Tyson Thompson was hit by a pitch and Coffee hit a sac fly to score Bueno for TSU’s first run. DeLeon hit another sac fly to knot the contest at 2-all before Justin Cooper’s RBI single scored Thompson for a 3-2 advantage. Mississippi State knotted the contest at 3-all with an RBI double in the bottom frame as the scoring would cease for both teams until the fourth.

The Tigers put four runs on the board in the top of the fourth. With two outs, runners on first and second, and Cooper at bat for Texas Southern, the Bulldogs’ reliever, who replaced the starter after 1.2 innings, threw the team’s third wild pitch of the night, allowing the Tigers to score a run and regain the lead at 4-3.

After the Bulldogs’ allowed their fourth walk to the Tigers, Oscar Ponce reached first due to a throwing error made by the home side’s shortstop to grow their lead to two runs for a 5-3 score. As the 8,160 people in attendance witnessed the latest events on the diamond and wondered of a possible upset happening before their eyes, the Tigers continued their wave momentum, this time in the bat of Bueno. His 2-RBI single to center increased TSU’s control of the game for a 7-3 score, with them being fully engrossed on making Feb. 25, 2020 a famous day in the school’s baseball history.

After the fifth inning, Guarnere was relieved by Loza, thereby ending his day having pitched five innings. If there was any way for the Tigers to continue their stranglehold of the game and see it through to the end, the bullpen had to pull their weight as well, and that’s exactly what they did against Mississippi State.

Although the Tigers’ offense was silenced for the sixth and seventh innings, at the same time, Loza resorted one of last year’s College World Series participants to just a walk. Outside of a walk in the seventh, Loza sat the opposing batters down in a 1-2-3 fashion during the sixth and eighth innings.

WATCH: The 7 longest home runs in College World Series history (that we know of)

TSU opened the eighth with consecutive strikeouts for two quick outs but an MSU fielding error allowed Bennevendo to reach base. DeLeon was hit by a pitch and both him and Bennevendo stole bases to get into scoring position. Cooper drew a walk to load the bases and Nic Garza reached first on a fielder’s choice which scored Bennevendo and offered TSU a much-needed insurance run as they led 8-3.

In the ninth, Loza continued his relief in dominating fashion with a first out grounder to short until a pair of walks and an RBI single forced manager Michael Robertson to replace him for Jesse Garcia, who subsequently struck out the next two batters he faced to close it out and give the Tigers an 8-4 win.

After a two-day break, the Tigers begin conference play at home for the first time as they take on the Arkansas-Pine Bluff Golden Lions. The teams will play a three-game series over the weekend from Friday, Feb. 28 to Sunday, Mar. 1, with the first game starting at 5 p.m., the second at 2 p.m., and the third at 1 p.m. at MacGregor Park.