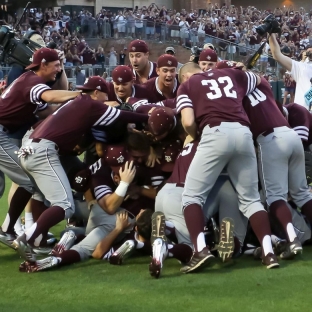 Trailing 6-2 going into the top of the eighth, things looked bleak for the Aggies. Nick Choruby gave the Aggies some life with a leadoff single to centerfield and with one out, Braden Shewmake reached on a fielding error by shortstop Max Bazin. Hunter Coleman roped a double to left-center knocking in Choruby and driving Davidson starter Evan Roberts from the contest. Reliever Austin Leonard plunked Cole Bedford with a pitch to fill the bags with Ags and Blake Kopetsky slapped a single up the middle to knock in two runs and cut the Wildcats’ lead to 6-5. After Walker Pennington swung and missed at strike three for the second out of the inning, George Janca was issued a seven-pitch walk to reload the bases.

The Aggies sent pinch-hitter — Jorge Gutierrez — to the mound and Davidson responded with a pitching change, bringing in Barry Allen. Allen got Gutierrez to pop up behind the mound, but second baseman Alex Acosta was unable to hang on to the ball after being leveled by third baseman Eric Jones. Texas A&M scored two runs on the miscue to take a 7-6 lead and in his second at-bat in the frame, Choruby bounced a two-run single up the middle to inflate the cushion to three runs.

Pennington put the dagger in with a three-run home run to leftfield in the top of the ninth.

Texas A&M (41-21) broke the scoring seal in the top of the third inning. Janca started the frame by driving a 1-2 pitch off the scoreboard in leftfield for his sixth home run of the season. With two outs, Logan Foster sent a 1-1 pitch the same way to stake the Aggies to a 2-0 lead.

Davidson (35-26) took advantage of the early evening sun to knot the game in the bottom of the third. Cam Johnson got things started with a gapper to left-center and Will Robertson followed with a single up the middle. A&M starter Corbin Martin fanned the next two batters, but Jones was able to loft a fly ball to right-center and Aggie outfielders’ inability to find the ball led to a two-run double.

The Wildcats tacked on three runs in the bottom of the fifth. Johnson and Robertson got the rally started again, this time with a double and single. Alec Acosta gave Davidson its first lead of the game with a single to rightfield. After Brian Fortier flied out for the first out, Jones knocked in Robertson with a sacrifice fly and Justin Lebek plated Acosta with a sacrifice fly.

Corbin Martin (7-4) worked in traffic much of the game, allowing five runs on eight hits and one walk while striking out seven in 4.2 innings. For the second straight day John Doxakis (4-3) earned the win out of the bullpen. He allowed one run on two hits while striking out three in 2.1 innings. Kaylor Chafin picked up his third career save, all in this year’s NCAA Championship. He retired all six batters he faced, including three strikeouts.

Brett Centracchio started the bottom of the sixth by hitting a laser shot over the rightfield fence for a solo home run, staking Davidson to a 6-2 lead.

The Aggie offense was powered by Choruby, Bedford and Janca with two hits each. Pennington logged three RBI and Choruby and Kopetsky chipped in with two apiece.

The Aggies open up College World Series play against Louisville either next Saturday or Sunday. The date and time of the matchup in Omaha will be announced Monday evening.