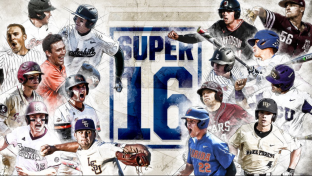 Day 3 of the Division I baseball Super Regionals, what a blur.

Saturday’s action saw a first in Super Regional history as all eight home teams emerged victorious in their respective series openers. Texas A&M, Louisville and Oregon State were able to capitalize in Game 2 and now head to Omaha with championship aspirations.

On Sunday, four more teams punched their tickets to Omaha — Florida State, TCU, LSU and Cal State Fullerton. However, there is still one series left in the Super Regional round thanks to some untimely weather courtesy of Mother Nature.

Florida and Wake Forest will pick up where they left off on Monday at 1 p.m. ET. A rain delay suspended play in Game 2 with Wake Forest leading 5-4 in the middle stages of the ballgame. Depending on the outcome of Game 2, Game 3 — if necessary — would begin shortly thereafter.

No rest for the weary, though, as the road to Omaha is coming into the final stretch. Be sure to keep an eye on all the updates and coverage from NCAA.com, and read on below for some of what you may have missed. More action from the diamond is set for Monday afternoon.