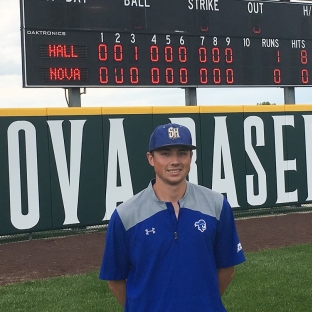 PLYMOUTH MEETING, Pa. — Seton Hall senior Zach Prendergast pitched a no-hitter, and pitched to just one batter over the minimum Sunday as the Pirates defeated Villanova 1-0 to clinch a berth in the 2017 Big East championship.

The victory ensures that the Pirates will make their seventh straight appearance in the Big East tournament. The top four teams in the conference qualify for the event and the bottom three teams — Villanova, Butler and Georgetown — can no longer catch The Hall in the standings.

The Seton Hall senior faced just one over the minimum as he fired a no-no on Sunday! pic.twitter.com/T7GOD5dDuE

Prendergast needed only 82 pitches to achieve the rare feat. He struck out a career-high 10 batters and was only a sixth-inning Pirate error away from a perfect game.

Seton Hall used some good two-out hitting to plate the game’s only run in the top of the third inning. Senior Jackson Martin led off the inning with a double down the right-field line and advanced to third on a fly out by Ryan Ramiz. With two outs, freshman Matt Toke hit a bloop single past the second baseman to score Martin.