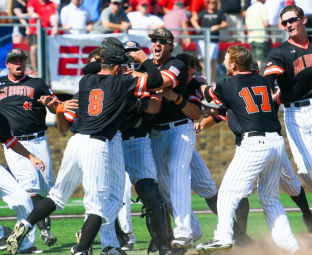 LUBBOCK, Texas — Sam Houston State baseball rallied from a two-run deficit for a 4-3 win on Monday over No. 5 Texas Tech at Dan Law Field at Rip Griffin Park to claim the Lubbock Regional, advancing to the first Super Regional in program history.

The Bearkats (44-21) found themselves down 3-1 to the No. 5 Red Raiders (45-17) in the bottom of the fifth but answered with three runs in the next two innings to retake the lead. Meanwhile, Lubbock Regional MVP Riley Cooper picked up his third win of the tournament with 4.2 innings of relief.

That came less than 24 hours after Cooper picked up the win with 3.2 innings of relief in the first game of the regional final on Sunday. The win pushes Sam Houston into the Super Regional, making the Kats the first team out of the Southland Conference to ever advance past the regional round.

Hunter Hearn crossed home with the winning run as part of a two-run sixth inning, scoring from first on the second Texas Tech error of the day after a check swing from Lance Miles was unable to be fielded successfully by Red Raider shortstop Orlando Garcia.

Sam Houston will face Florida State after the Seminoles beat Auburn to win the Tallahassee Regional.

For the third straight game,  the Bearkats were outhit on the scoreboard but Sam Houston made the most of its opportunities. Hearn led the way with a 2-for-4 day on his way to being named to the all-regional team, scoring twice — including the winning run in the bottom of the sixth — and driving in a pair. He was the only Bearkat with a multi-hit game, but six others picked up a hit, including Taylor Beene’s RBI double in the fifth, an inning after the Red Raiders had taken the lead.

Riley McKnight and Blake Chisolm also had a hit apiece, as did Jaxxon Grisham and Robie Rojas, who scored twice.

For the first time in program history, Sam Houston is headed to an NCAA Super Regional!#RoadToOmaha #EatEmUpKats pic.twitter.com/jFITwlfjMz

For the Red Raiders, they pounded out a dozen hits, including a 3-for-5 day from Hunter Hargrove, but they once again struggled to hit with men on base. They were hitless in their first 10 tries with men in scoring position and finished the day just 2-for-15 in that category.

Once again, Sam Houston went with a staff-by-committee, which worked to near perfection. Seth Ballew got the nod for the start and put up a pair of scoreless innings before Dakota Mills came in to help out in the third.

But it was Cooper who once again carried the bulk of the load, going 4.2 innings with three strikeouts while throwing 55 pitches just hours after throwing a season-high 60 pitches in Sunday’s win over the Red Raiders.

Heath Donica also made his first relief appearance of the year, and the third of his career, striking out one and leaving a pair of runners stranded in the eighth. Freshman Nick Mikolajchak earned his 13th save of the year and third of the regional with a scoreless ninth, leaving the tying run on second base when he struck out Hunter Hargrove swinging for the game’s final out.

– The Bearkats now have 44 wins on the season, their most since 1987, the program’s first season at the Division I level. It is one win shy of the program record of 45 set in 1986.

“We came into Sam Houston State, I was hired by Dr. Hoyt, coach Bobby Williams … I am very thankful for that opportunity. We have an incredible administration, incredible support and a great location. The vision when we came in was top-25 RPI, 40-plus wins, conference champs and ultimately a chance as a program, community, team and university to have a chance to walk through the gates of Omaha. Now we have that chance. I am so thankful to our administration for giving me that opportunity. This is for all the former players. There have been a ton of great players who have come through this program that deserved a chance to continue playing. There were teams on the verge and maybe something didn’t go their way. There have been a ton of great players to come through here. Right now I can tell you this, what we have done now is for all of those guys who gave their blood, sweat and tears.”

“It really hasn’t hit me yet. This is a program that works, lives and talks about us being a David in a land full of Goliaths … they deserve this moment. I am so thankful to the Lord that he carried us through this thing. Four weeks ago, we were getting on a bus after getting swept by Houston Baptist. This group is very tough and resilient. We talked this week that it’s only impossible until somebody does it.”

Robie Rojas on the team mindset and mentality…

“We played this whole week like we weren’t afraid to lose. We weren’t afraid to go home. No matter what we love each other. We had a great run. When you play without a fear of losing or crashing and burning, you can do things like this.”

“We talk about all the time that if you show up to the field and you’re only 40 percent, you give 100 percent of that 40 percent. Coach Deggs told me he just needed one inning and that he didn’t care if the ball couldn’t reach the plate. I just wanted to do it for the guys behind me and the guys in the dugout. That’s what we all do it for — each other.”

“This team is by far the biggest thing I’ve been a part of. We stayed climbing. We’re all ready to go practice tomorrow. I am extremely thankful for everything and to be part of this team.”