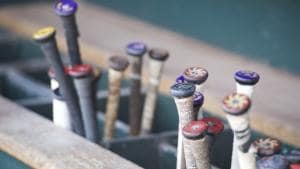 
The NCAA Baseball Rules Committee met last week in Indianapolis to set protocols for in-season bat testing that will take place in Division I during the 2020 season.

Committee members proposed mandating in-season bat testing in 2017, and the rule was approved by the NCAA Playing Rules Oversight Panel with delayed implementation due to the cost of about $1,500 for purchasing the necessary equipment. The rule will go into effect in Division I next season and in Divisions II and III for the 2021 season.

LOOK AHEAD TO 2020: Early preseason top 25 | 7 teams that may win their first College World Series

The location for barrel testing will be determined by the host and will be communicated to
participating schools no less than 24 hours before the scheduled start of competition. Testing
should occur following each team’s practice time or at an agreed-upon time by the participating schools or the conference. Procedures are as follows:

Part of the testing procedure is the visual inspection of the bat. This will be done to ensure the bat is on the approved NCAA model list and does not have a predominantly white barrel, flat spots, an audible rattle or cracked or loose end caps or attachments.

Bat testing consists of two parts. The first part, a ring test, is conducted to verify the maximum diameter and that the barrel is not misshapen. The procedure should be:

Committee members recommended a 20-second action rule be enforced before all pitches in the 2019-20 academic year.

All rules proposals must be approved by the NCAA Playing Rules Oversight Panel, which is scheduled to discuss baseball rules recommendations via conference call Aug. 14.

It will be optional for a school to have visible clocks to keep the time between pitches. If no visible clock is used, one of the base umpires will keep the 20-second time limit on the field.

“The committee believes pace of play of the game is a big issue,” said Jim Carone, committee chair and coach at Wagner. “As we get later in ballgames, things seem to take a little longer, and the game slows down. We felt it is important that we have action every 20 seconds to keep the game flowing.”

The committee also recommended that all chest protectors used in competition for the 2019-20 academic year be models that are approved by the National Operating Committee on Standards of Athletics Equipment.