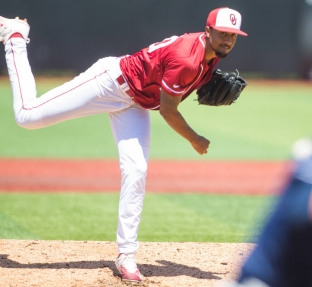 LOUISVILLE, Ky. — Here on the upper concourse of Jim Patterson Stadium, there was tradition to see in every direction Friday afternoon.

Look one way, and there were the stately twin spires of Churchill Downs, just up the street. You could almost hear the thoroughbreds running. Look the other, and there was another old warhorse — Oklahoma, back in the NCAA tournament. Seems like it had been awhile.

This is the 37th tournament for the Sooners, but it had been four years since the 36th. A dry spell? Try the longest in Norman in 45 years. So it was nice to be back, especially when they blew away Xavier with a seven-run rally in the seventh inning for a 7-2 victory.

“I think it kind of puts us back on the map,” said Cade Harris, and he certainly helped with a three-run double to highlight an Oklahoma revival. And now the Sooners get Louisville at home Saturday night, where the Cardinals are 30-4 this season. Tough assignment. But give them a few moments to savor where they are.

Harris clears ’em! After a BB to Z that loaded the bases, Cade brings all three in.

Just getting this far has been a breakthrough. Oklahoma, a 10-time College World Series participant and two-time champion, is not used to shutting down its operation at the end of May with no NCAA tournament invitation. This isn’t basketball. There is no NIT.

“It’s actually around us every day that we walk to the field,” Devon Perez — who gave the Sooners seven innings of two-run pitching Friday – said of the tradition. “Down the tunnel, we have a bunch of signs hanging up that tell you about history, and tell you that we’re Oklahoma and we can do anything.”

Get to the tournament, for instance.

Friday’s seventh inning was a moment of truth for these Sooners. They are 35-22 but have been a mercurial bunch, losing nine of 10 in April, and dropping four in a row coming into the tournament. The downward trend seemed to be continuing when Xavier’s Zac Lowther carried a two-hitter and 2-0 lead into the seventh. Oklahoma was famished for a big hit, having gone 0-for-8 with runners in scoring position in a taut Perez-Lowther battle.

“We’ve definitely been in this situation before and we’ve done exactly what we did today,” Perez said. “I knew were going to do it, I just didn’t know when.”

But it was getting a little late. Hughes looked at the scoreboard and couldn’t help but think of all the chances that had slipped away.

“The whole key to it is not panic, stay with your routine and stay with your plan,” he said. “These guys don’t overanalyze things like I do. Our guys don’t think like that. I do. But they don’t, which is the most important thing.”

The Sooners needed a boomer. But from whom? How to save a game, and maybe the chance to win this regional:

Domenic DeRenzo tripled with one out in the seventh. A third strike to Kyle Mendenhall got away, and Mendenhall was safe when catcher Nate Soria’s throw to first was wide, Soria somewhat distracted by DeRenzo dancing around at third. “The play of the game,” Hughes called it.

A walk loaded the bases. Harris was next, and had a question.

“I looked at Coach Hughes and said `What should I look for right here?”’

Answered Hughes: “See something, up and run like hell.”

Lowther’s first pitch to Harris — his 116th of the game — was indeed a high fastball, and Harris drilled it into the gap and ran like, well, you know. He cleared the bases for a 3-2 Oklahoma lead. The fog lifted, the Sooners kept slashing, and it was 7-2 before the inning was over.

Hughes had a word for it: ”Relief.”

Did you know the Sooners are only team in the nation with five series wins this season over opponents in the top 25 of the RPI?

Or the designated hitter who drove in two runs Friday, Brylie Ware, was the Big 12 co-Newcomer of the Year, having detoured to junior college after getting exactly one college offer out of high school?

Or the catcher, Renae Martinez, once went to the College World Series with UC Irvine? He transferred to Oklahoma but was floundering at .128 as a backup until injury opened up a lineup spot late last season. He hit .423 the final nine games, and .326 so far this year. He’s also one of 10 children.

Or that Harris. an infielder by trade, once was the sixth left fielder in six games for the Sooners as Hughes was looking for anyone to fill the spot earlier this season? Harris had to borrow a used outfielder’s glove. But he found a home. And if his .253 average going into Friday didn’t look much like a leadoff hitter, his .463 on-base percentage did.

Put all that together and Oklahoma is back. Now we’ll see for how long. The Louisville crowd will be afire Saturday night, and Brendan McKay is pitching.

“Just another game. It’s the same game,” Harris said. “The environment really doesn’t bother me. Just play your game and everything will be fine.”