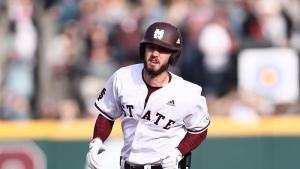 
BILOXI, Miss. — Timely hitting, along with a solid outing on the mound by graduate starting pitcher Carlisle Koestler and the bullpen, helped the No. 17 Mississippi State baseball program to a midweek, two-game sweep of No. 4 Texas Tech in front of 6,029 fans at MGM Park in Biloxi, Mississippi.

Junior Josh Hatcher delivered the go-ahead RBI double in the seventh inning to help State hand Tech back-to-back losses for the first time in 37 games, dating back to the 2019 season. Texas Tech entered the weekend leading the NCAA in hits and runs scored, averaging 12 hits per game. Mississippi State held them to eight hits total in the two games.

Mississippi State (12-4) took the early lead with a run in the third, before Texas Tech (16-3) tied the game at one in the fifth. Two runs in the seventh gave the Diamond Dawgs the lead for good, but the Red Raiders would cut the advantage to just one with a run in the eighth.

ANOTHER TOP-5 SWEEP: Georgia Southern sweeps No. 3 Georgia baseball for the first time since 2015

For the second straight night, graduate Spencer Price was called upon to close the door on the Red Raiders. Price struck out one in a perfect ninth inning to collect his second save of the season and 16th of his career to move him into a tie for No. 7 on the career charts. Price has equaled Bryan Hardwick (16; 1979-80, 82) and former teammate Cole Gordon (16; 2016-19).

Koestler worked five innings and allowed one run on four hits in the no decision. After allowing four base runners in the first six hitter, the right-hander sat down 12 of the next 15 to hold Tech at bay. Senior Riley Self (1-0) didn’t allow a base runner in two scoreless innings of work to earn the win, before junior Jaxen Forrester allowed one run on one hit and one walk. Both Self and Forrester struck out two batters.

Junior Rowdey Jordan and freshman Logan Tanner each reached base three times in the game, with Jordan scoring two of the three runs. Jordan doubled, singled and walked in the game, while Tanner had a pair of walks and one single.

COLLEGE BASEBALL RANKINGS: Which team could take over Texas Tech’s No. 4 spot?

Jakob Brustoski (1-1) took the loss with two runs allowed in two-thirds of an inning of work. Starting pitcher Hunter Dobbins worked six innings and allowed one run on seven hits. Dobbins walked one and struck out five in the no decision.

On winning two midweek games versus a ranked Texas Tech team
“It’s huge for us. [It’s] momentum, and the way we played and the way we pitched, I was really proud of our arms. That’s one of the better offenses in the country, and we played two really clean games in an unbelievable environment…For some people, these are the only Mississippi State games they’ll see because they live on the coast, and for us to come out here and play really well in a great environment was a lot of fun.”

On the timely hitting
“We’ve always been a little bit of a momentum offense. As we get going and getting some of those two-out hits, that is huge [momentum for us]. I thought one of the biggest plays was Rowdey [Jordan] stealing the bag [in the seventh inning]. We’re doing a little bit of everything right now.”

Bottom third: Rowdey Jordan led off the inning with a double and moved to third on a Jordan Westburg base hit. Josh Hatcher followed with an RBI ground out to push the first run of the game across. Mississippi State 1, Texas Tech 0

Top fifth: After a leadoff base hit from Parker Kelly, Tech moved the runner to second with a sacrifice bunt, before MSU starting pitcher Carlisle Koestler got the second out of the frame. Cal Conley roped a two-out double into the right-center field gap to score the run and tie the game. Mississippi State 1, Texas Tech 1

Bottom seventh: Jordan singled with one out and stole second base, before Hatcher doubled with two outs to push the go-ahead run across the plate against Texas Tech reliever Jakob Brustoski. After a wild pitch and a walk put runners on the corners, Luke Hancock doubled to give MSU a two-run lead. Mississippi State 3, Texas Tech 1

Top eighth: MSU reliever Jaxen Forrester issued a one out walk, before a two-out single brought in Texas Tech’s second run of the game. Forrester struck out the final batter of the inning to preserve the MSU lead. Mississippi State 3, Texas Tech 2

Mississippi State will host Arkansas in a three-game series beginning on Friday night at 6:30 p.m. at Dudy Noble Field.