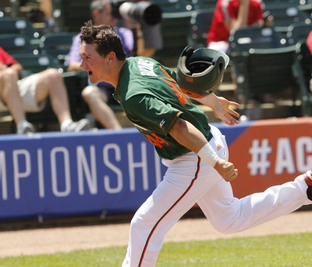 CORAL GABLES, Fla.— Miami’s players and coaches gathered in the clubhouse for their annual team meeting after the NCAA baseball tournament pairings were unveiled.

It was over quickly.

No one knew what to say.

Miami’s record streak — 44 consecutive years in the NCAA tournament, the longest for any college team in any Division I sport — ended quietly Monday, when the Hurricanes did not get an at-large berth into this year’s 64-team field. The Hurricanes (31-27) were the first team out, the NCAA said, which did nothing to soften the blow for a team that went to the College World Series in each of the last two years.

The @CanesBaseball‘s streak is the longest run in NCAA history in any sport. pic.twitter.com/HlGm0aqZLC

“It’s hard,” said Miami infielder Johnny Ruiz, tears welling in his eyes as he sat in the dugout afterward and paused to try to compose himself enough so that he could speak. “Being a guy from Coral Gables … it’s been an honor to play my four years here. I came back to try to help this team win. So it’s just hard. I’m sorry.”

Miami is a program that begins every year with the highest of expectations. The last word players see when they depart their clubhouse is “Omaha,” a nod to the site of the College World Series. The story gets told annually about how when Jim Morris interviewed to become coach of the Hurricanes, who became a national power starting in the 1970s under Ron Fraser, he noticed an NCAA second-place trophy being used as a doorstop.

This was Morris’ 24th season at Miami — and just the second time on his watch that the Hurricanes won’t play a game in June.

“It’s an honor and a privilege to be part of 44,” said Morris, who plans to step down after next season. “It’s a streak that’s unmatched in any sport in NCAA history. Being part of that, part of that with coach Fraser, it’s an honor. I’m very disappointed that we didn’t get in.”

Miami started this season 4-8, and was 15-19 in mid-April. But the Hurricanes went 16-8 in their final 24 games, hoping that finish along with a 16-13 mark in the Atlantic Coast Conference and two wins in the ACC tournament would be enough.

Thank you to the best fans in college baseball. pic.twitter.com/leQtL9gQE4

“It’s devastating for a lot of people, including myself,” Morris said.

It was the second time in the 2016-17 academic year that a Miami team could argue it was snubbed by NCAA tournament selectors. Back in the fall, Miami’s women’s soccer program became the first team out of 154 in ACC history to post a .500 record in conference games but not get a spot in the NCAA field.

The longest active streak of NCAA appearances now belongs to Florida State, with 40. The next-closest is Cal State Fullerton, with 26.

One of the greatest runs of all time in college sports 44 consecutive years of post season play! Miami Hurricane baseball! U Family!

“Having ‘The U’ on our chest, it’s just the biggest honor in the country, the best thing that’s ever happened to me in my life for sure,” senior first baseman Christopher Barr said. “All the past players here, they’re always watching. I’m going to be watching for the rest of my life. You can cut me open, I’m going to be orange and green forever.”