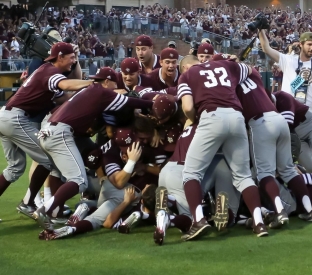 It’s been home sweet home for host teams through two days of the 2017 Division I baseball Super Regionals.

The eight hosts are a combined 11-1 so far in their best-of-three series, with three teams already clinching College World Series berths with 2-0 series victories. Host teams started with an 8-0 record to begin the round — a new Super Regionals record.

RELATED: How do national seeds perform in the CWS | 2017 bracket

The first and only blemish on the record so far came Saturday evening when Cal State Fullerton slugged its way to a 12-0 victory over host Long Beach State to force Game 3 of the series on Sunday. But even with that blowout factored in, the eight hosts are outscoring their visitors 66-46 through 12 games.

Last year, host teams finished just 9-11 in the Super Regionals. Only three of the higher-ranked squads advanced to the CWS, while four of the five that were sent home were swept. Eventual national champion Coastal Carolina was one of the visitors to play the role of spoiler, winning both games against LSU in Baton Rouge.

Granted, this year’s results represent a small sample size, but 2017 Super Regional hosts boast a .917 winning percentage as of Sunday morning. From 1999-2016 — representing the modern tournament format — the combined mark stands at .609. The 2009 tournament was the best season for higher-ranked seeds in Supers (.778 winning percentage), while 1999 saw the most wins by hosts in the round  (15).

Both of those marks can be broken with another good day or two from this year’s hosts. Four higher-ranked teams go for sweeps on Sunday while Long Beach State looks for revenge against Cal State Fullerton in a pivotal Game 3.

While home-field advantage has appeared to play a factor in the 2017 Super Regionals, whether by coincidence or not, all that can be thrown out the window at the next stage, where the final eight teams all step onto an even playing field at Ameritrade Park in Omaha.