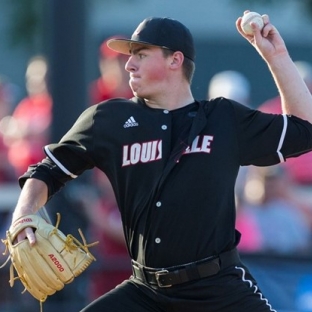 OMAHA, Neb. — Four collegiate stars, including three from 2017 NCAA Super Regional contenders, are the finalists for the 31st annual Dick Howser Trophy, presented by The Game Headwear. Balloting was conducted by the National Collegiate Baseball Writers Association in conjunction with the Dick Howser Trophy committee and the St. Petersburg Area Chamber of Commerce.

This outstanding group of four players hail from four schools in three different conferences and cover ground from coast to coast. All four players are juniors and are from schools that have not had a previous winner of the Dick Howser trophy.

The winner will be announced on Saturday, June 17, at a 10 a.m. (CDT) national news conference at TD Ameritrade Park – home of the 71st annual NCAA World Series.

Each finalist embodies the major principles of character, leadership, desire and competitive spirit exhibited by Dick Howser, the All-American shortstop and later head coach at Florida State before managing the Kansas City Royals to the world championship in 1985. He also is the namesake for Dick Howser Stadium at FSU.

Bukauskas, a junior right-handed starter from Ashburn, Virginia, was the go-to weekend hurler for the Tar Heels of coach Mike Fox and racked up a 9-1 overall record with a 2.53 in 15 starts. He recorded well over one strikeout per inning pitched with 116 whiffs in 92-plus innings pitched.

The All-America and 2017 All-Atlantic Coast Conference choice has been part of the North Carolina rotation for three consecutive years and limited opponents to a .188 batting mark. His clutch conference pitching work kep the Tar Heels in contention all season for the ACC championship.

How high in the #MLBDraft will the @DiamondHeels pitcher go? pic.twitter.com/HJmO9KRPE2

McKay, a junior from Darlington, Pennsylvania, is 9-3 as a pitcher with a 2.31 ERA and 131 strikeouts in 97.1 innings in ‘17. He has tied the Louisville career mark for strikeouts with 376 in just three campaigns with Kyle Funkhouser (who played at UofL from 2013-16) and is among the top hitters nationally in the cleanup position with a .356 average, 17 home runs and 56 RBIs.

The 2017 Atlantic Coast Conference Player of the Year and first-team All-American also tied a school record with four home runs in one game against Eastern Kentucky. The Cardinals of coach Dan McDonnell are 50-10 entering the weekend NCAA Super Regional matchup with cross-state rival Kentucky. McKay also is a two-time recipient of the prestigious Jon Olerud Award for best multi-position player in NCAA Division I in 2015 and ’16.

First baseman Rooker of Germantown, Tennessee, was the 2017 Southeastern Conference Player of the Year with a .395 batting average, 23 home runs, 82 RBIs and NCAA-DI-most 30 doubles. The first team All-America choice is bidding to become the conference’s first Triple Crown (average, homers, RBI) winner since Rafael Palmeiro of MSU in 1984.

Rooker also has committed just one error in 419 total fielding chances at first base and is among SEC leaders in stolen bases with 18 in 23 attempts. His .827 slugging percentage tops the conference for the 40-25 Bulldogs of coach Andy Cannizaro as they travel to LSU for the 2017 NCAA Baton Rouge Super Regional.

Brent Rooker is on pace to join Rafael Palmeiro as the only players to complete the Triple Crown in SEC history. pic.twitter.com/WA1SqvN1MO

Thompson, a junior righty from Florence, Oregon, is the wins leader for the most successful DI team nationally with that 52-4 overall mark before taking on Vanderbilt. His 13-0 record helped OSU roll to a 29-1 home mark in ’17, while he added 106 strikeouts in 110-plus innings of work and a microscopic 1.30 ERA.

The Oregon State co-ace with Luke Heimlich earned All-Pac-12 laurels as well as All-America recognition while he assisted the Beavers in rolling through the Corvallis Regional with a 3-0 mark. Thompson also played a leading role in OSU’s final 27-3 worksheet in Pac-12 games — a conference record.

What a night for Jake Thompson as he comes out to a standing ovation from #BeaverNation.#GoBeavs pic.twitter.com/EOM8m2JK9l