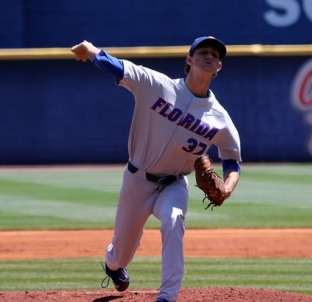 HOOVER, Ala. — The Gators exploded for 12 runs in the final two innings on Friday to beat Mississippi State 12-3 at the SEC tournament in Hoover.

With the win, Florida advances in the winner’s bracket and will play Saturday afternoon at approximately 4:30 p.m. ET against the winner of Friday afternoon’s game between Arkansas and Mississippi State.

Florida (42-15) tied a SEC tournament record with 11 runs in the eighth inning and beat Mississippi State (36-23) to advance to Saturday’s semifinal.

All in one inning for @GatorsBB:

The Bulldogs got on the board first in the bottom of the fourth inning. Cody Brown reached via an error and scored on Hunter Vansau’s triple to make it 1-0.

Vansaud tried to add another run by tagging up on a foul pop to the right side, but Deacon Liput’s throw home beat him and JJ Schwarz applied the tag to end the inning.

Mississippi State added a run in the fifth after a wild pitch allowed Josh Lovelady to score from third and Vansau hit a RBI double to right center in the sixth for a 3-0 lead.

After Bulldogs starter Cole Gordon limited the Gators to three hits through seven innings, the Florida offense exploded in the eighth.

On to the next one!! #GoGators pic.twitter.com/Ax1qUeYEbH

Christian Hicks led off with a single to right and Mississippi State went to the bullpen. Mike Rivera followed with a walk and Blake Reese singled to right to load the bases for Deacon Liput.

Liput got the Gators on the board with a RBI single and the floodgates opened. Rivera scored on a wild pitch to make it a one-run game.

Jonathan India drew a bases-loaded walk to bring home the tying run and Austin Langworthy gave the Gators a lead with a two-run single.

Also notable in this: Jackson Kowar went from being 2 innings away from his 1st collegiate loss to 2 innings from 11-0 this season. #Gators

Another walk to Rivera brought home another run and Garrett Milchin, who pinch-hit earlier in the inning, singled to right for two more runs to give UF an 8-3 lead.

Liput then cleared the bases with his second hit of the inning, a double off the wall in left-center to cap the huge rally.

Florida sent 15 batters to the plate in the inning and scored 11 runs on six hits. The 11 runs tied for the most in a single inning in SEC tournament history. The last time UF scored 11 runs in an inning came against Miami (Fla.) in the 2015 College World Series in Omaha, Nebraska.