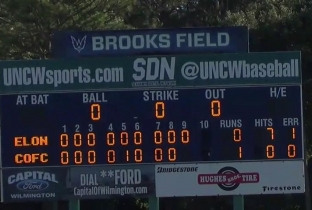 One would probably guess the first no-hitter in the history of the Colonial Athletic Association tournament would result in the team pulled off the feat feeling a little more celebratory, but that wasn’t the case for Elon on Thursday.

Phoenix pitchers Jordan Barrett and George Kirby combined to throw eight innings of hitless baseball, walking three, but a fifth-inning run was enough to make College of Charleston a winner.

That run in the bottom of the fifth — which immediately followed a 93-minute rain delay — came after a walk, sacrifice bunt, passed ball and RBI groundout. Despite having runners on base in each remaining inning, including a runner thrown out at the plate in the eighth, Elon was unable to scratch any runs across and was eliminated from the tournament after dropping its first game 5-2 to William & Mary that same morning. You don’t see this every day in baseball.

The Cougars stay alive in @CAASports Tournament despite not recording a hit, as Ober picks up his 24th career win. pic.twitter.com/PE8qF4rPNP

College of Charleston, on the other hand, will continue its quest to reach Saturday’s championship in Wilmington, North Carolina.