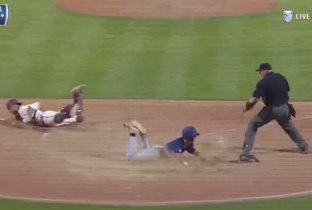 Getting two RBI on an at-bat is always an impressive feat. Doing that on a sacrifice hit stands out even more, but plating two runners on a sacrifice bunt without any fielding errors? Now that’s some impressive base-running.

That’s also exactly what Arizona did Thursday night against Arizona State. With the bases loaded and just one out in the top of the 7th, the game was tied 3-3 when Alfonso Rivas stepped up to the plate.

On an 0-1 count, Rivas laid down a beautiful bunt that bounced between the pitcher’s mound and first. Arizona State’s pitcher backhanded the ball and flipped it to first to barely nab Rivas as the runner on third scored, but by the time the first baseman fired home, the second Wildcat runner was already sliding across the plate.

The Wildcats would score one more run in the inning and go on to win 6-5, thanks in big part to a play you don’t exactly see everyday:

The ol’ 2-run sac bunt from the Cats! Alfonso Rivas with a great bunt and better base running gets us 2! https://t.co/PtQUuMydpY