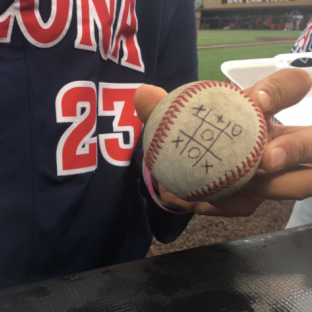 The competitive juices were flowing throughout the early matchup in the Lubbock Regional between Arizona and Delaware on Saturday. That was evident as last year’s national runner-up Wildcats and the Blue Hens battled to a 5-5 tie heading into the 11th inning.

Lightning in the area then put a halt in the thrilling action, delaying resumption for more than two hours. But that wasn’t enough to stop the two squads from competing against each other in some other challenges on the diamond.

The Wildcats and Blue Hens first took to tic-tac-toe to kill time, drawing the board on a baseball and passing it between dugouts. It’s not clear which side won but it looks like, from the following tweet, that it was a draw. How fitting, considering the two sides’ standing on the scoreboard at the time of the delay.

Playing a little Tic-Tac-Toe with @DelawareBASE while we wait. pic.twitter.com/7wb1udQMXa

They later turned to on-field races, starting in the infield. According to Arizona’s Twitter account, 6-foot, 198-pound pitcher Luke Soroko was one of the participants in the “slow man challenge” portion of the competiton.

Both teams resumed playing baseball shortly before 9 p.m. ET, putting an end to a delay that started at 6:41 p.m. Arizona eventually won 6-5 in the 12th inning, thanks to an opposite field home run from Alfonso Rivas in the top half of the frame.