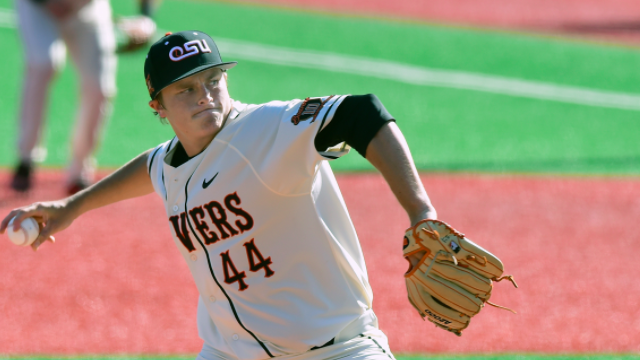 College Baseball: 19 things to know about the Oregon State Beavers

Start with the 41-4 record. Doesn’t that tell us all we need to know about the No. 1 ranked Oregon State team that is so clearly at the top of the baseball heap as the NCAA Tournament nears?

Well, no. Lots of other things to mention, if we are to be up to date in our Beaver-ology. Here are 19 of them:

2. Junior Luke Heimlich leads the nation in earned run average with a nice, tidy 0.76. Actually, he should be a sophomore. He graduated from high school a year early and took the fast lane to Corvallis, Oregon.

3. Heimlich and fellow pitcher Jake Thompson have combined to start 26 games. They have allowed 19 earned runs between them, and 109 hits. Plus 19 wins and one loss.

Oregon State’s Jake Thompson has an earned run average of 1.11, third in the nation as of Monday.

4. Thompson has an earned run average of 1.11, third in the nation as of Monday, and a lot lower than his 3.6 grade point average in economics.

5. Second baseman Nick Madrigal has been the catalyst on offense, hitting .389 at the top of the lineup. The 5-7 sophomore has been around the game for a long time. When he and his twin brother were born, their father put baseballs in their cribs at the hospital.

6. The current Pac-12 membership has won 28 national championships. Next best is the SEC at 11. So it takes heavy lifting to win the league, but the Beavers just clinched the conference, and lead by light years. Actually, seven games through Sunday. They are 24-3 against Pac-12 teams by a combined score of 152-73.

7. Oregon State has been to five College World Series. The Beavers’ first was 1952. They had to wait 53 years for the next one, but have been four times since 2005 — which says something about Pat Casey’s coaching era.

8. Casey just won his 1000th game as a head coach. He’s more Oregon than Nike. Born there. Grew up there. Went to high school and college there. Played at Portland and later, after a pro career, got his degree at George Fox University, which is in Newberg, Oregon, southwest of Portland. And here’s something you don’t see every day. He coached the baseball team while he was playing for the basketball team.

9. By the way, Casey has 23 years at Oregon State. The Beavers’ coaching position has better longevity than the Galapagos tortoise. He’s only the fourth head baseball coach since 1937.

10. The pitching staff has 10 shutouts, and a 1.94 ERA that leads the nation. Those tiny dots in the rearview mirror in second place are Louisville and Illinois-Chicago, at 2.59.

11. Catcher Adley Rutschman’s average is 59.5. Wait a second. That was his average yardage during the football season, when he handled kickoff duties. He’s hitting .227 with 25 RBI. And opponents have stolen only 14 bases all season.

12. Reliever Max Engelbrekt has five saves, a 0.52 ERA, and is on his way to an MBA. He’s one of only two seniors on the team

Bravo to Max Engelbrekt on a career-long 3 2/3 innings in relief.

13. The Beavers were back-to-back College World Series champions, in 2006-07. In 2006, Oregon State lost its first CWS game to Miami 11-1, then allowed 13 runs in six victories to win the championship.

14. The Beavers were left out of the NCAA Tournament last season, despite a 35-19 record and a tie for third in the Pac-12; the first time they had missed it since 2008. The anger and shock from that shunning has driven them to this very day.

15. The defense has committed two errors in the last eight games.

17. There is one line on the stat sheet Oregon State doesn’t dominate. The Beavers might be outscoring opponents by 145 runs, but they’ve hit the same number of homers – 18. Or six fewer than national leader Niko Hulsizer of Morehead State.

18. The Ducks play in Goss Stadium at Coleman Field, which first went up in 1907. There were only 45 states in the Union then, and it was less than four years after the Wright Brothers introduced manned flight. The place is five years older than Fenway Park.

19. Seven former Beavers are currently in the big leagues. One of them is Jacoby Ellsbury, playing for the Yankees, who have put up some pretty good numbers so far.

But not nearly as good as the Oregon State Beavers.