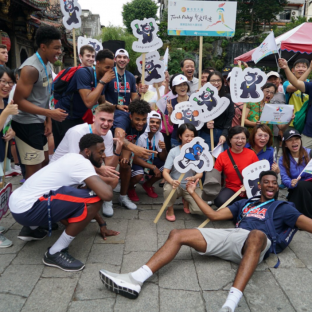 While several college athletes take advantage of the summer to study abroad or join teams for foreign tours, this month hundreds are meeting their international counterparts for 12 days of competitions in Taipei, Taiwan.

More than 300 NCAA athletes representing more than 70 schools are part of national delegations that will compete for gold, silver and bronze in the World University Games, also known as the Summer Universiade, the second-largest multi-sport event behind the Summer Olympics with 131 countries competing in 22 sports.

The biennial World University Games are organized by the International University Sports Federation, best known as FISU, and began in 1959. The NCAA and FISU recently pledged closer collaboration to benefit student-athletes all around the world.

“As stewards of athletics at the world’s colleges and universities, our organizations must continue to create the positive experiences and opportunities for students to not only compete but also learn through sports,” said NCAA President Mark Emmert.

In addition to the select teams that are comprised of the top athletes from a mix of universities, five USA rosters are, at their core, complete squads from an NCAA team.

Houston track and field, Iowa baseball, Purdue men’s basketball, Maryland women’s basketball and UCLA tennis have changed their colors to red, white and blue for the World University Games. Players from these teams were allowed to get a jump start on offseason training and practices in order to prepare for the events taking place this month.

The USA men’s basketball team will look to defend its gold medal after beating Germany in double overtime at the 2015 Universiade, marking the first time since 2005 the Americans stood atop the podium. Purdue will compete as the U.S. national team in Taiwan, following Kansas’ gold-clinching efforts in Gwangju, South Korea.

Women’s basketball aims for a five-peat

The USA women’s basketball team, represented this year by Maryland, will compete for its fifth-straight gold medal. The Americans have not conceded the gold since 2007, going a perfect 24-0 over the last four Games.

Leroy Burrell and Carl Lewis, head and assistant coach, respectively, at Houston will serve in those roles as the Cougars’ men’s and women’s track and field athletes represent the USA in Taiwan.

Burrell, a two-time world record holder and Olympic gold medalist, and Lewis, a nine-time Olympic medalist, battled in the early 1990s for the title of “World’s Fastest Human.” The Houston alums teamed in Barcelona in 1992 for Olympic gold in the 4×100-meter relay, setting a world record in the process.

Foes to friends for fencing brothers

Jerry and Jason Chang will represent the USA at the World University Games in fencing. The brothers fenced at rival schools with younger brother Jerry competing for Harvard and Jason fencing for Penn. The two faced off in the final bout of the Ivy League Championship in 2013. Jerry clinched the title for Harvard, winning 5-4.

For the United States, women’s soccer faces South Korea, men’s water polo takes on Japan and women’s water polo, with eight of its 13 players hailing from Stanford, competes against France.