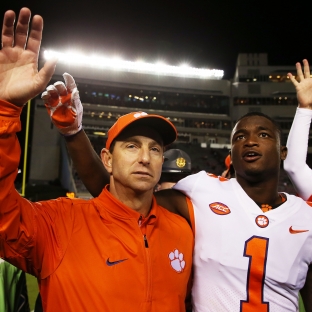 Clemson head coach Dabo Swinney was addressing his team when everyone heard a collision that took place on Perimeter Road above the east end of the practice facility. The team was gathered 300 yards from the scene of the accident, which was not visible due to trees and other growth on the side of the hill.

Seconds after the second collision, it was apparent that a car was sliding down the side of the steep embankment. The car and passenger, Clary Miles, fell approximately 100 feet down the hill coming to rest about 20 feet from the Seneca River that surrounds the Clemson football practice fields.

Upon hearing the car sliding down the hill, all Clemson players, coaches and personnel rushed to the edge of the river. Student managers Jack Wardlaw and Jack Sari, student athletic trainers Scott Crothers and Bailey Black, student coach Daniel Boyd and student videographer Eric Suttles, all swam across the river to reach Miles. Boyd and Suttles are military veterans.

Student athletic trainers Rachel Alterio and Ana Wright also went to the scene to provide help in removing Miles from the car and onto land. The students stayed with Miles until EMS personnel arrived.

Coach Dabo Swinney gathered his team in prayer while the students removed Miles from the car and the team remained at the scene until an ambulance took him to the hospital.

Home is the place where you know you’ll always belong…

Miles is a Clemson freshman student worker in the school’s football office. A Daniel High School graduate and classmate of Clemson receiver Will Swinney, Miles played on the summer little league baseball team that Swinney coaches.

“When we got to the edge of the water I think our entire team was ready to jump in and help, but I held them off (blew his whistle) to let those who were experienced in this area go across,” said Swinney, who visited Miles in the hospital Tuesday evening.

“This accident became personal very quickly. I have known Clary since he was eight years old. I am just thankful we were out there and could get to him quickly and direct the EMS to where he was. It might have been a while before anyone found him had we not been there.”

Alabama vs. Clemson: What you need to know if (when?) they meet again

Miles is recovering from injuries in a hospital, and his mother Paula Miles released a statement:

“I want to tell everyone how grateful we are to everyone associated with the Clemson football program that helped my son. I am especially grateful for those trainers and managers and others who swam to help Clary and get him out of the car. Thomas Austin (graduate assistant coach) rode in the ambulance with him to the hospital and that was so comforting. I am just so glad my son is alive.”