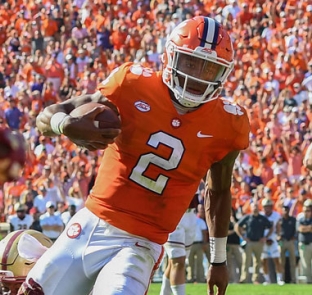 Clemson football: No. 2 Tigers hope to remain undefeated after next top-15 test vs. Virginia Tech

CLEMSON, S.C. — The tests just keep coming for No. 2 Clemson. The Tigers will face its third top-15 opponent in four weeks when it heads to 12th-ranked Virginia Tech this weekend.

The Tigers (2-0 Atlantic Coast Conference) are off to their third straight 4-0 start and are brimming with confidence after defeating Boston College 34-7. Next up are the Hokies (4-0), who open their league season attempting to end a four game losing streak against the Tigers.

“I definitely think our best football is in front of us,” Clemson coach Dabo Swinney said. “Especially if we’ll keep bringing the right mindset and just learning from mistakes.”

They made plenty of them the first three quarters against Boston College as Kelly Bryant threw two interceptions and the Eagles kept the Tigers pinned deep in their territory in a game that was tied at seven entering the final period. But Clemson took control in the fourth quarter with four rushing touchdowns.

Swinney said there were several things to improve on offense, a task that he expects his players to quickly lock into given the stakes of Saturday night’s game.

“It presents a challenge,” said Adam Choice, a junior tailback who’s scored touchdowns in the past two games. “It seems in my mind, it tests us mentally to see if we can stick together. We pride ourselves in staying calm and cool and not getting frustrated. If we can figure that out and stick to our game plan, I know we’ll have a chance.”

You’re not going anywhere against this #Clemson defensive front.#ALLIN pic.twitter.com/LAuoRmuv0Y

Clemson’s excelled in its early prime-time showdowns, holding then No. 13 Auburn to two field goals in a 14-6 victory on Sept. 9. Clemson followed that up the next week with its 47-21 dismantling of then No. 14 Louisville and reigning Heisman Trophy winner Lamar Jackson.

Clemson safety Tanner Muse said the team is accustomed to the spotlight after playing the national title game the past two seasons.

“Being in these big games, it’s what we come here for,” he said. “You enjoy them. You don’t take anything for granted and come with the same mentality as any week’s game.”

Clemson has had much experience playing and excelling in big moments. It started in earnest under Swinney in 2011 when the Tigers topped defending national champ Auburn, defending ACC Atlantic Division champion Florida State and league champ Virginia Tech in three straight weeks.

The Tigers have gone 20-9 against ranked opponents the past seven seasons — and an eye-popping 12-1 in their last 13. The lone loss was the 45-40 defeat to Alabama in the national title game two seasons ago.

This kid is a freshman, people. #ALLIN pic.twitter.com/kMuCHjp6Vc

“We knew when the schedule came out this was going to be a challenging start,” Clemson co-offensive coordinator Jeff Scott said. “I think we’re in a good position.”

Clemson has somewhat switched its offensive identity behind first-year starter in quarterback Kelly Bryant. Instead of dazzling opponents through the air, the Tigers are grinding them down on the ground. They’ve gained 297 yards or more in three of their four games so far and have scored 17 of 20 touchdowns on the ground.

No matter what Clemson has done on offense, it’s rock-solid defense — third nationally in overall and scoring defense — has kept opponents in check. Virginia Tech coach Justin Fuente knows the Hokies will have their hands full attempting to keep Clemson out of its backfield.

“It’s not a read and react situation,” Fuente said. “It’s a pin your ears back and try to create havoc.”

Bryant believes Clemson’s winning experience against ranked opponents, both this season and over the past few years, serves them well in preparation and attitude.