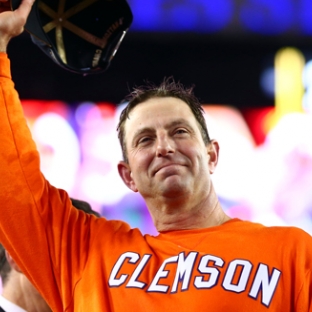 Getting upset is tough. Especially when you’re the defending college football national champion and the No. 2 team in the country.

Syracuse pulled off a huge shocker in their 27-24 upset of Clemson, ending the Tigers’ 11-game win streak going back to last season. The Orange’s win earned the respect of more than just the fans, though. Clemson head coach Dabo Swinney made his way into the Syracuse locker room after the game to personally congratulate Syracuse on a game well played.

Dabo just solidified my respect for him. Came in our locker room, shook our hands and congratulated us. WOW. That’s a dude right there

Swinney made a point to give his regards to Syracuse’s second-year coach Dino Babers after the game as well.

Dabo is all class. Can clearly see him say “I’m so happy for you” to Dino Babers after a potentially season changing loss. pic.twitter.com/2M5nsLtARC

MORE: Which College Football Playoff team was the best? Ranking them all, 1-12

The Tigers suffered a blow when they lost quarterback Kelly Bryant to a concussion in the final minute of the first half. Bryant entered the game with a  left ankle last week he sustained against Wake Forest.

Before heading to Syracuse, Clemson won 12 straight games on the road, tying for the second-longest active road win streak in the nation. The Tigers also had the longest overall win streak in the country with 11 victories. Syracuse quarterback Eric Dungey was key in disrupting Clemson’s streak, throwing for 278 yards and three touchdowns. Senior kicker Cole Murphy provided the deciding factor for the game, kicking a tie-breaking field goal in the fourth quarter.

The Orange’s performance prompted a class act from the coach who always says he wants Clemson to be a “model” program. Swinney’s actions certainly set the standard for that.