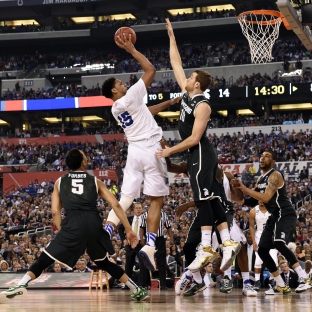 Champions Classic: Just another game? America’s best coaches will tell you it’s anything but

You know it’s a heavyweight doubleheader, when Kansas vs. Kentucky is the undercard.

Actually, the main event of the Champions Classic comes in the first game Tuesday night. Duke vs. Michigan State. More? Mike Krzyzewski vs. Tom Izzo. More? No. 1 vs. No. 2 in the Associated Press poll – for only the seventh time this century.

That requires a brief discussion on the history of No. 1 vs. No. 2 which we can get to in a moment. But first, about Tuesday night in Chicago’s United Center.

“It’s not just another game. I don’t think it’s another game for them, either,” Izzo said.

“It should be a hell of a night,” Krzyzewski mentioned.

There’s Duke, starting four freshmen for the first time in 35 years, putting up 97 and 99 in its first two games, with double-doubles each night from Marvin Bagley III. No freshman had ever done that his first two games as a Blue Devil.

Krzyzewski’s advice to all his newcomers about Tuesday night?

RELATED: Which Preseason All-American could win Player of the Year

There’s Michigan State, with Miles Bridges opening his Player of the Year campaign with a double-double in a 98-66 rout of North Florida, and the Spartans scoring 60 points in the paint. Their high all last season was 42.

And 62-year-old Izzo – “The guy coaching them, he’s older, but not as old as me,” Krzyzewski noted – who doesn’t need to be reminded of one ugly number on his otherwise shining record. He’s 1-10 against Mike Krzyzewski.

“Everybody knows that,” he said. “At least I do. Every single day I do.”

There’s the other game, too, and it’s awfully good.

In the season opener, Kentucky started five freshmen for the first time since the 2014 national championship game and had to hustle from 12 points down to beat Utah Valley 73-63. Two nights later, the green Big Blue huffed and puffed past Vermont 73-69.

RELATED: Meet the team that faced Kentucky and Duke on consecutive nights

“There’s just so much we have to do,” John Calipari said, “and part of this early is going to be about survival.”

Kansas, replacing three of its top four scorers, did not miss a shot the first seven minutes of the season and blew past Tennessee State 92-56, with Devonte’ Graham contributing 10 points, seven rebounds, 12 assists and three steals.

“We’ve got to play with more of a tougher mindset,” Bill Self said of the Kentucky assignment.

So this annual November convention of bluebloods – with 8,234 all-time victories and 18 national titles among them — is ready for its seventh edition. In three of the six seasons, the Champions Classic has sent at least one team to the Final Four – though none the past two years. You want gravitas? All four coaches are in the Hall of Fame.

“It’s one of the greatest nights of college basketball with those four teams playing. I’m damn proud that we’re one of the four that have done this year after year after year,” Izzo said. “We’ve held our own in it.”

And this year, it glitters even more with No. 1 vs. No. 2. The very phrase evokes a certain aura, and it should. Some of college basketball’s most hallowed moments were born from such a matchup, using the Associated Press poll.

1957 – No. 1 North Carolina outlasted No. 2 Kansas and Wilt Chamberlain 54-53 in three overtimes to win the national championship and finish the season a perfect 32-0. It might be the best display of endurance in tournament history. The night before, the Tar Heels needed three overtimes to get past Michigan State.

1961-62 – Forty-nine states stepped aside while Ohio settled everything. Two years in a row, Ohio State carried the No. 1 ranking into the national championship game, and two years in a row the Buckeyes were foiled by No. 2 Cincinnati, 70-65 in overtime and 71-59. Those remain the last title games between teams from the same state.

1968 – First, came the Game of the Century. That’s the way it was marketed, anyway, when No. 2 Houston and Elvin Hayes edged No. 1 UCLA and Lew Alcindor 71-69 in the Astrodome; a mega-event that drew 52,000-plus and was the first regular season game ever nationally televised in prime time. Then came the rematch at the Final Four, with their rankings switched, not to mention their karma. No. 2 UCLA crushed No. 1 Houston 101-69.

The real blow to UCLA came in March, when the No. 2 Bruins squandered a seven-point lead in the second overtime and lost to No. 1 North Carolina State 80-77 at the Final Four. Thus ended their seven-year hold on the national championship.

1991 – No. 1 UNLV had stormed through every opponent by an average of 32 points, and many argued the only roadblock to a perfect season was a trip to No. 2 Arkansas, who had won 20 in a row.  The Rebels rolled 112-105. But many were wrong; there was another roadblock. Duke in the Final Four.

1996 – Massachusetts carried the No. 1 ranking and a bright young coach to the Final Four, but lost to No. 2 Kentucky 81-74. The coach was John Calipari.

2013 – No. 2 Michigan State over No. 1 Kentucky 78-74 in the Champions Classic. The Kentucky coach? John Calipari. Yep, add another trivia question with Calipari as the answer:  Who is the only coach to lose three times as No. 1 against No. 2, at three different schools?

The ledger doesn’t get changed often. It will Tuesday night.


Mike Lopresti is a member of the US Basketball Writers Hall of Fame, Ball State journalism Hall of Fame and Indiana Sportswriters and Sportscasters Hall of Fame. He has covered college basketball for 43 years, including 38 Final Fours. He is so old he covered Bob Knight when he had dark hair and basketball shorts were actually short.

Share. Twitter Facebook Google+ Pinterest LinkedIn Tumblr Email
Previous ArticleAndy Katz's Power 36: A week-by-week look at who's in and out of the NCAA tournament
Next Article Women's basketball: Stars and top teams shine in opening weekend