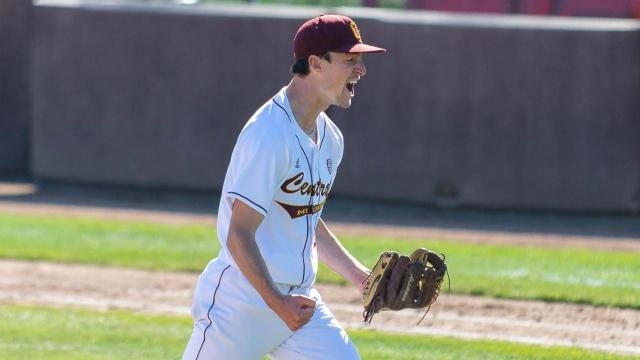 MOUNT PLEASANT, Mich. — Jordan Patty has been very good throughout his career and particularly in the 2021 season.

On Friday, he was perfect, and he made Central Michigan baseball history.

Patty, a junior right-hander from Midland, set down all 21 batters he faced as the Chippewas topped Miami (Ohio), 14-0, in the opener of a four-game Mid-American Conference series at Keilitz Field at Theunissen Stadium. The game was called after seven innings on the run rule.

It was the 22nd no-hitter and the first perfect game in CMU’s 115 seasons of baseball. The last Chippewa to throw a no-hitter was Joel Pelland on May 6, 2003, in an 8-1 win over Siena Heights.

“It was a good day to say the least,” Patty said. “It was really fun. (My teammates) have all the energy in the world and to have them come charging out was pretty cool. It was just so surreal. It was a lot of fun today.”

Patty (6-1) was magnificent, matching his career high with 11 strikeouts and extending his scoreless innings streak to a remarkable 38 2/3. He threw 77 pitches, 53 of them for strikes. He recorded seven fly-ball outs and three groundouts.

The program record for consecutive scoreless innings is 40, set in 1974 by Chris Knapp.

“It’s been a really good run and hopefully I’ll just keep it going,” Patty said, adding that the key has been, and continues to be, command of his fastball. “Just having the command – fastball in, fastball out, fastball up, fastball down – it makes hitters really uncomfortable and then to break off a slider off of that. It’s really tough on those guys.

“I know how hard hitting is. I was a shortstop my freshman year hitting a buck-40, so I know how hard it is. The guys didn’t really say much to me (during the game). I’m not a big talker when I’m pitching, but I knew I had something going in the sixth with one or two outs.”

The win was CMU’s fifth consecutive and its eighth in its last nine starts. The Chippewas improved to 25-11 overall, 17-4 MAC. They remain tied with Ball State atop the league. The Chippewas and RedHawks are scheduled to play a doubleheader on Saturday (1 p.m.).

“It’s been kind of like a broken record the last month or so with how he’s pitched the first game of the series, and obviously he was just outstanding again today,” CMU coach Jordan Bischel said. “We didn’t need a ton of great defense behind him because he piled up some strikeouts.

“After four innings it kind of crept into my mind because he was really sharp, and he was really executing pitches and there was not much hard contact. He was really in command of the game the entire way.”

As is seemingly always the case in such a game, there was a highlight defensive play that kept the perfecto intact. In this case, it came in the second inning when CMU third baseman Aidan Shepardson dove to his glove side to snag a hard grounder, then got to his feet and threw a strike to first to complete the out.

Both Patty and Bischel also credited catchers Nick Dardas and Griffin Lockwood-Powell. Dardas, a redshirt freshman, started behind the plate and was replaced in the second inning by Lockwood-Powell, who was playing his first game after sitting out for eight weeks with an injury.

The Chippewas gave Patty all the support he would need when Garrett Navarra drove in a run with a sacrifice fly in the first inning. The Chippewas picked up another run in the third when Zach Gilles doubled, took third and then scored on an error, one of six committed by the RedHawks in the game.

CMU blew the game open with a 10-run fourth. The Chippewas sent 14 men to the plate and, aided by four Miami errors, scored all 10 of their runs with two outs in the frame.

Gilles and Jakob Marsee had two hits apiece and Justin Simpson drove in three runs to lead CMU at the plate.