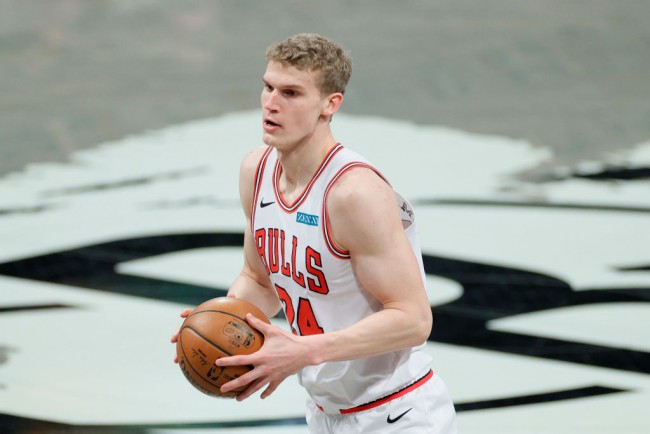 NEW YORK, NEW YORK – Lauri Markkanen of the Chicago Bulls dribbles during the first half against the Brooklyn Nets at the Barclays Center on May 15, 2021 in the Brooklyn borough of New York City. (Photo : Sarah Stier/Getty Images)

The biggest free agent remaining on the board has finally found a team, with the Cleveland Cavaliers signing Lauri Markkanen in a blockbuster deal on Friday. According to ESPN‘s Adrian Wojnarowski, the Cavs acquired the 24-year-old Chicago Bulls forward on a four-year, $67 million contract as part of a three-team, sign-and-trade agreement.

Markkanen’s contract wasn’t cheap, though, and the Cavs needed to trade someone out to create the necessary cap space. They decided to part ways with Larry Nance Jr., who eventually ended up with the Portland Trail Blazers in the three-team deal. The Bulls managed to land Derrick Jones Jr. in the trade, Portland’s lottery-protected first-round pick in 2022, and the Denver Nuggets’ 2023 second-round draft pick.

Markkanen, the big winner in the three-team deal

The big winner in this deal is Markkanen, who finally landed the huge contract he was searching for. It seemed like opportunities were running out for Markkanen as teams gobbled up free agents in a hurry this offseason, but the Cavaliers answered his prayers, giving him a contract worth nearly $17 million in annual salary.

Markkanen will look to rebuild his career in Cleveland after struggling the past season with Chicago. The Finnish big man struggled with the Bulls last year, averaging 13.6 points and 5.3 rebounds per game. It would be interesting to see, though, how Markkanen will fit with Cleveland’s retooled lineup.

The Cavaliers gave Jarrett Allen a lucrative $100 million, five-year contract this offseason to be their new franchise center. They then bolstered their front court by selecting Evan Mobley as the No. 3 overall pick in this year’s NBA Draft. Mobley has already drawn comparisons to Anthony Davis for his style of play and is expected to log heavy minutes in the power forward position this year.

Kevin Love is also in that packed Cavs’ front court rotation. He appeared in just 25 games last season and is set to earn a whopping $30 million this year. Markkanen’s role is a huge question mark right now, but it is a nice problem to have for head coach J.B. Bickerstaff.

Nance a perfect weapon for Chauncey Billups in Portland

The Blazers also were big winners in this trade as they finally grabbed a highly-capable stretch four in Larry Nance Jr. He provides much-needed depth to a Portland lineup that lost Zach Collins this past offseason. Nance joins Cody Zeller as the two reserve bigs behind presumed starters Jusuf Nurkic and Robert Covington.

What makes Nance Jr. signing a good addition for Portland is his versatility. He can play at the 3 and defend multiple positions, giving new head coach Chauncey Billups an extra weapon on both offense and defense.