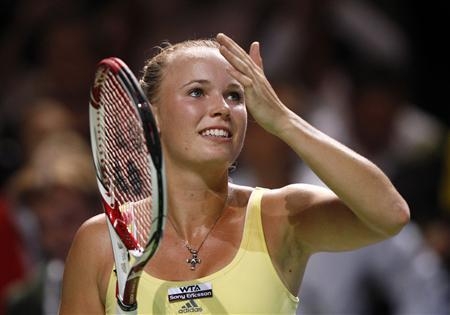 Caroline Wozniacki career crisis? Rory McIlroy fiancee says nothing wrong with her game despite fall from No. 1 to No. 11 in world rankings [VIDEO]

Caroline Wozniacki career crisis? Rory McIlroy fiancee says nothing wrong with her game despite fall from No. 1 to No. 11 in world rankings [VIDEO]

The sky is not falling, according to Caroline Wozniacki.

The 23-year-old Dane says her career is in good shape despite her drop to No. 11 in the latest WTA rankings, a third-round exit from the Australian Open last month, still no Grand Slam titles to account for and more trouble with coaches who are not her father.

Wozniacki, who is engaged to golf star Rory McIlroy, was the No. 1 player in the world for 67 weeks, beginning in October of 2010. She held onto the top spot for the majority of 2011 but lost it after the 2012 French Open and has not regained it since.

Wozniacki, who won 12 tournaments from 2010-11, has captured just three titles since. She told aljazeera.com in advance of the 2014 Qatar Open that she’s not worried about her slow descent.

“I don’t think anything has gone wrong [with the fall in rankings]and being world number one for two years is a pretty good effort,” said Wozniacki, who begins play at the Qatar Open on Wednesday. “I’ve achieved basically anything I could on the tour. I’ve won 21 tournaments and been number one for so long, but winning a grand slam definitely is the biggest goal of mine that I haven’t achieved yet. You always try and improve so obviously that’s the incentive when you onto the practice courts.”

She recently hired Michael Mortensen as her coach after a fallout with coach and former Maria Sharapova mentor Thomas Hogstedt, who told her he was going on vacation rather than traveling with her to Qatar.

Mortensen coached Li Na to a French Open championship in 2011. She added the 2014 Australian Open to her Grand Slam resume.

Wozniacki’s father Piotr, has been her coach for most of her career. When she has tried to seek outside counsel, the results have not been encouraging. Hogstedt lasted three months. Ricardo Sanchez was her coach for two months, and Thomas Johansson lasted four months with her.