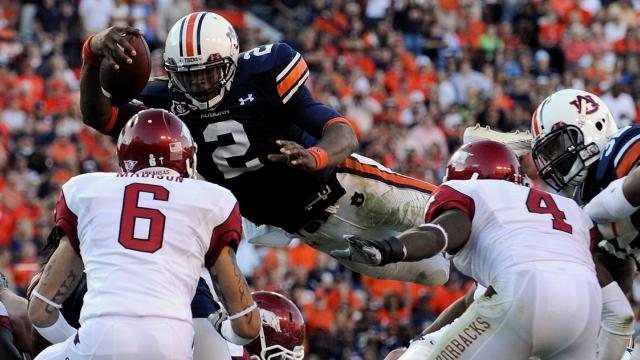 
Cam Newton’s lone season at Auburn is on the short list of the greatest college football seasons ever, as the Tigers’ do-it-all quarterback threw for 30 touchdowns, rushed for 20 and even had a touchdown reception. He led the team in passing and rushing, averaging 10.2 yards per pass attempt and 5.6 yards per rush attempt.

When you throw in his Heisman Trophy and national championship, you can see why Newton’s final college season was so special.

Here’s everything you need to know about Newton’s college career.

The vitals on Cam Newton

Here are Cam Newton’s career stats in college. Scroll to the right to view the complete stats.

Where did Cam Newton go to college?

Cam Newton’s college career started at Florida, where he played for two seasons before going to Blinn College and then Auburn. He chose Auburn over Mississippi State and Oklahoma.

What kind of prospect was Cam Newton in high school?

Newton was the No. 26 prospect in the 2007 recruiting class, according to the 247Sports Composite rankings.

What were some of Cam Newton’s best games in college?

Basically every game Cam Newton played in an Auburn uniform is worthy of being called one of his best games. In his debut with the Tigers, he completed 9-of-14 passes for 186 yards, three touchdowns and no interceptions against Arkansas State while running for 171 yards and two touchdowns on just 15 attempts.

Newton threw for 265 yards and two touchdowns against Oregon in the BCS National Championship Game, while also running for 64 yards

What awards did Cam Newton win in college?

What did people say about Cam Newton?