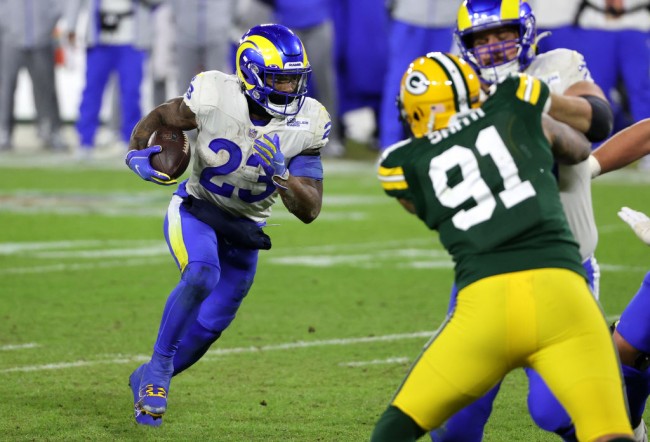 GREEN BAY, WISCONSIN – JANUARY 16: Cam Akers #23 of the Los Angeles Rams carries the ball in the second half against the Green Bay Packers during the NFC Divisional Playoff game at Lambeau Field on January 16, 2021 in Green Bay, Wisconsin. (Photo : Dylan Buell/Getty Images)

Bad news for Los Angeles Rams fans as running back Cam Akers suffered a torn Achilles tendon and would likely miss the entire 2021 season. According to ESPN‘s Adam Schefter, the second-year star sustained the injury while working out and underwent testing to confirm the sad diagnosis.

The Rams announced the heartbreaking news on Tuesday morning but did not offer details surrounding the injury. One crucial question that needs to be answered soon is where Akers was training when he tore his Achilles tendon.

Where did Akers pick up his injury?

If Akers’ injury happened at the Rams’ facility in Los Angeles, there might not be an issue beyond getting the running back healthy for the 2022 campaign. That wouldn’t be the case, though, if Akers picked up the injury away from the facility.

Offensive lineman Ja’Wuan James learned that the hard way when he suffered an Achilles injury off-site, allowing the Denver Broncos to forgo the $10.58 million salary he was due in 2021 after they placed the offensive tackle on the non-football injury list. James, who is now a member of the Baltimore Ravens, recently filed an employment grievance against the Broncos and is seeking $15 million in lost wages.

Akers’ injury is a huge blow to the Rams as they look to bounce back this season with new quarterback Matthew Stafford. Akers exceeded expectations in his rookie year last season, rushing 145 times for 625 yards and two touchdowns and catching 11 passes for 123 yards and another score in the 13 regular-season games he played (five starts).

However, the 52nd overall pick in the 2020 NFL draft made his mark in the postseason, delivering two huge playoff performances for the Rams. Akers ran for 131 yards and a touchdown and caught two passes for 45 yards in the Rams’ 30-20 upset victory over the Seattle Seahawks. He then rushed for 90 yards and a score on 18 carries the next game in their loss to the Green Bay Packers.

With Akers sidelined for the foreseeable future, the question for Rams and NFL fantasy fans everywhere is who will take his snaps this upcoming season. Third-year player Darrell Henderson appears to be the leading candidate to handle main running back duties for the Rams this coming campaign.

Henderson produced at a better rate than Akers in the 2020 season, rushing 138 times for 624 yards and five touchdowns. He also caught 16 passes for 159 yards and a score, but his season was plagued by hamstring, thigh, and ankle injuries as he finished the year on injured reserve. That allowed Akers the opportunity to shine in the playoffs.

Peterson is an interesting option for head coach Sean McVay. He has amassed 14,820 rushing yards in his career and is just 450 yards shy of passing Barry Sanders for fourth on the all-time list.