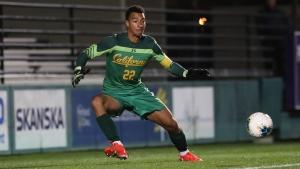 
STANFORD — Tommy Williamson earned and then scored on a second-half penalty kick and Drake Callender made three saves to shut out No. 4 Stanford in California’s 1-0 upset of the Cardinal on a chilly Thursday night at Cagan Stadium. The Golden Bears have now defeated two top five opponents in one week, including then-No. 1 Washington on Nov. 7 in Seattle.

In the 56th minute, Cal senior defender Simon Lekressner played a beautiful ball out of the back to Williamson, a forward, streaking into the Stanford penalty area. Cardinal goalkeeper Andrew Thomas upended Williamson on the play leading to the PK. On the ensuing spot kick, Williamson  slotted the ball past Thomas for the gamewinner and for his team-leading ninth goal of the year.

“Simon played a really nice backspin ball to my foot, and I took a touch,” Williamson said. “It was a bit of a heavy touch, and I knew I had to lift it over (Thomas) to try to get around him and slot it. But he swiped me and took me out, and that led to the PK. It was a definite goal if I got past the keeper. And then I felt confident enough to step up to take the PK and put it in the back of the net.”

After an up and down regular season, the Bears have put themselves in contention to potentially earn selection into the postseason, with the NCAA announcing its 48-team field on Monday. Along with the wins over No. 1 UW and No. 4 Stanford, Cal also owns a 3-0 victory at No. 16 UC Santa Barbara.

“It was obviously a fantastic effort and an incredible result,” Cal head coach Kevin Grimes said of Thursday’s victory. “We now have three wins on the road against top 16 teams. We hope the selection committee sees our body of work and decides to take us to the NCAA tournament. There are not many teams in the United States that have the wins that we do. If they’re a committee that looks at big wins, then they’re going to be considering us closely for selection.”

Cal and Stanford split the season series, including Stanford’s 2-1 win in Berkeley on Sept. 20. Just like that game, Thursday’s match was a close one. Stanford outshot Cal, 13-9, and had a 2-1 edge on corner kicks. But the Bears had the edge where it mattered.

“Today we didn’t have anything to lose, and we just came out together as a team,” said Callender, who claimed his sixth shutout of the season Thursday. “This game means more than the other games because of the rivalry. There’s a lot of good morale within the team that helped us win today. I was proud of everyone, and getting the shutout was great, too.”