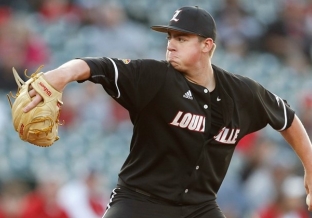 Brendan McKay can now add the title of Louisville’s all-time strikeout leader to his growing list of accomplishments this season.

The junior lefthanded pitcher/first baseman struck out career batter No. 377 in the second inning of his Super Regionals start against rival Kentucky Saturday afternoon, getting Kole Cottam swinging on a 94-mile per hour fastball up in the zone. That miletstone put him ahead of former Cardinals pitcher Kyle Funkhouser (2013-16), who struck out 376 batters in four seasons.

With his strikeout to open the 2nd inning, Brendan McKay stands alone as the @UofLBaseball strikeout king with 377! pic.twitter.com/utRfyQvosp

McKay ended his day with nine strikeouts while allowing just two earned runs in 6.2 innings of a 6-2 win. He now stands at 385 career punch-outs.

McKay broke another Louisville record in the fourth inning, on strikeout No. 6 of the day, when he recorded No. 137 of the season — a new single season program highmark. He’s reached triple digits in all three years at Louisville, punching out 117 and 128 batters, respectively, in his freshman and sophomore campaigns. This year, he’s struck out 10 or more batters on five separate occasions, including a season-high 15 against Pittsburgh on March 10.

Saturday was likely McKay’s final game on his home turf at Jim Patterson Field, as the junior is projected to be a top 10 selection in next week’s MLB draft. With the Louisville crowd well-aware of McKay’s bright future, the 6,237 fans in attendance gave him a warm ovation as he walked off the mound with two outs in the seventh inning.

Here’s the scene as Brendan McKay exits the Patterson Stadium mound for the final time in his brilliant career. Cards up 4-2, 2 on in 7th. pic.twitter.com/I3hse2f7yz

Louisville eliminated Kentucky with Saturday’s win and now moves on to its first College World Series since 2014 — one season before McKay was added to the roster. That means McKay will have at least one more outing to add to his newly-minted records, on the biggest of stages.