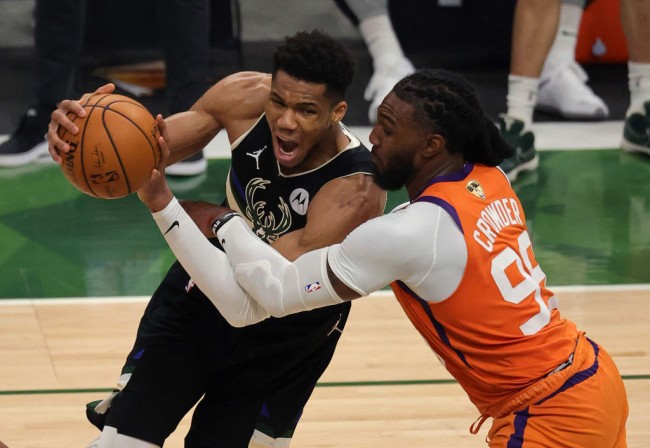 MILWAUKEE, WISCONSIN – JULY 20: Giannis Antetokounmpo #34 of the Milwaukee Bucks drives to the basket against Jae Crowder #99 of the Phoenix Suns during the second half in Game Six of the NBA Finals at Fiserv Forum on July 20, 2021 in Milwaukee, Wisconsin. (Photo : Jonathan Daniel/Getty Images)

The Milwaukee Bucks finally ended their 50-year title drought after beating the Phoenix Suns, 105-98, in Game 6 of the NBA Finals at the Fiserv Forum on Tuesday night. Giannis Antetokounmpo delivered a performance for the ages for the Bucks, who won the best-of-seven series 4-2.

The Greek Freak was simply unstoppable in the series-clincher, scoring 50 points, grabbing 14 rebounds, and dishing out two assists. He also was a menace on the defensive end, recording five blocks.

He shot 16-of-25 from the field in 43 minutes of action, but his efficiency on the free-throw line proved to be the difference in this contest. Antetokounmpo knocked down 17 of his 19 free throw attempts in the biggest game of his career.

It wasn’t just Giannis Antetokounmpo who starred in the championship-winning game. Four other players scored in double figures for the Bucks, Bobby Portis, Khris Middleton, Jrue Holiday, and Brook Lopez. Portis was sensational off the bench, scoring 16 points on 6-of-10 shooting from the field. Middleton scored 17 points for the Bucks while Holiday and Lopez chipped in 12 and 10 points, respectively, in Game 6.

The Bucks started Game 6 like a house on fire as they quickly showed their intentions of finishing the series at their home court. They raced to a quick 29-16 lead after the opening quarter as they shot 11-of-23 from the field. Giannis Antetokounmpo paced the Bucks with 10 points while Middleton added seven markers.

The Bucks took full advantage of the Suns’ slow start, with Phoenix players feeling the nerves as they played their first elimination game of the season. They shot 7-of-24 from the floor in the first period, committing five turnovers during the game’s opening 12 minutes.

Just when it seemed that Game 6 would be a coronation for the Bucks, the Suns battled back in the second quarter. They opened the second period with an 8-0 run and eventually tied the score at 33, with 5:33 remaining. The Suns continued to pounce as the Bucks struggled to get their offense going as they ended the first half with a 47-42 advantage.

It was a fantastic turnaround by the Suns, who outscored the Bucks, 31-13, during the second quarter. Giannis Antetokounmpo was the only Bucks player to have some offensive rhythm in that period, scoring seven points on 3-of-5 shooting from the field. He outscored the rest of his Bucks teammates, who recorded just six points in total on an abysmal 1-of-15 shooting from the floor.

Giannis Antetokounmpo takes charge in the second half

With the championship hanging in the balance, the Greek Freak went to work as soon as the second half started. He wreaked havoc on both ends of the floor in the third quarter, scoring 20 points in that frame to give the Bucks a 77-71 lead.

To further explain Giannis Antetokounmpo’s importance in this game at this juncture, he has scored 48 percent of the Bucks’ points through the first three quarters. However, they weren’t able to finish the quarter strong as the Suns uncorked a 6-0 run to enter the fourth quarter with the game tied at 77.

Giannis Antetokounmpo continued his tour de force performance in the final quarter, scoring 13 of his game-high 50 points in the payoff period to seal Milwaukee’s first title win in half a century.