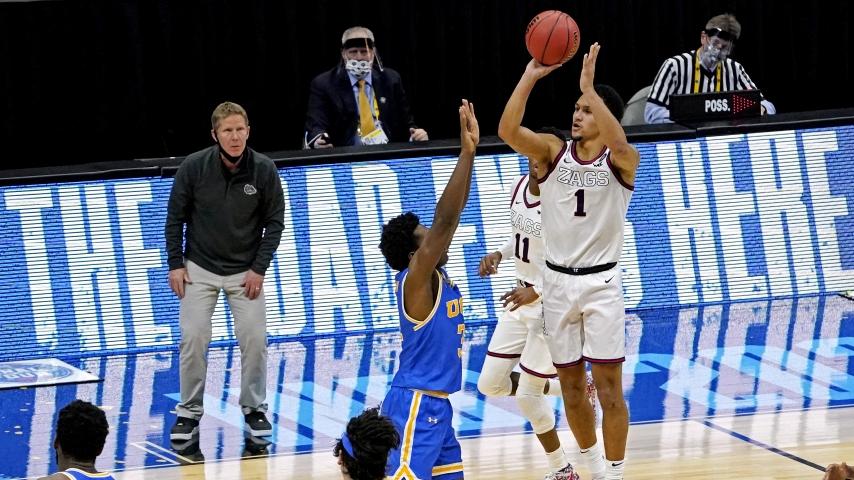 INDIANAPOLIS — There were 3.3 seconds left in overtime in the national semifinal between undefeated Gonzaga and UCLA, and more and more it appeared a spot in the championship game would be decided by another overtime. Johnny Juzang of the Bruins had made a layup off of his miss to tie the score at 90-90. Gonzaga was taking the ball out on its own baseline, and Corey Kispert inbounded the ball to Jalen Suggs, and seconds were ticking away.

“I knew we were good,” said Gonzaga coach Mark Few, “because it was in Jalen’s hands.”

When the ball is in Jalen Suggs’ hands, there is no such thing as a bad shot. As Suggs hurried up the floor, NCAA tournament history was set in motion.

Suggs took three speed dribbles, the last as he approached the midcourt line just to the right of the midcourt logo. He squared up a stride inside the line and released the ball over the cautious two-handed reach of UCLA defender David Singleton with about a second to go. The ball met the backboard and caromed into the basket. And the 8,131 fans scattered throughout Lucas Oil Stadium erupted with the knowledge they had just witnessed a moment that had taken its place alongside the title-winning shot of Villanova’s Kris Jenkins in 2016, the Christian Laettner shot that sent Duke to the Final Four in 1992, the stunning, title-winning dunk of North Carolina State’s Lorenzo Charles in 1983, and the most memorable moments in the history of the tournament.

DON’T MISS IT: How to watch Gonzaga vs. Baylor play for the national title

The freshman ran to his left to leap on a courtside table and start a celebration. Gonzaga’s perfect season was extended to a championship night on Monday by the 93-90 overtime victory for the ages. The Bulldogs (31-0) will meet the Baylor Bears in the first meeting of the two top-seeded teams since North Carolina defeated Illinois in 2005.

“He makes shots,” Few said of Suggs. “He’s got that magical aura. He makes them in practice all the time. It’s been crazy this year how many he has made in practice, last-second shots. I felt pretty good. I was staring right at it. And I said ‘It’s in. And it was.”

Suggs remembered the series of moments at the end. “Oh, my God,” he said, “I don’t know. I don’t know. I saw Johnny got the miss and put it back in. And Corey took it out right away, ‘Corey, Corey come here,’ and I got as many dribbles as I can. Tried to get as close as I could…

“(Singleton) was actually like right under me. But I just put it up. I was fading away with it. And it went off the backboard and in.”

Suggs finished with 16 points on 6-of-12 shooting, with five rebounds and six assists in an all-around game that was instrumental to keeping the Bulldogs in the game. Drew Timme had 25 points, including 17 in the second half and overtime. He also took a charge that preserved the perfect season and created an offensive foul by Juzang with 0.7 seconds to play in regulation. But this game would forever be remembered for Suggs’ magical shot.

He had long established an uncommon will to win and sense of competitiveness, rare qualities for a freshman. On Saturday night those qualities took on the stuff of legend. 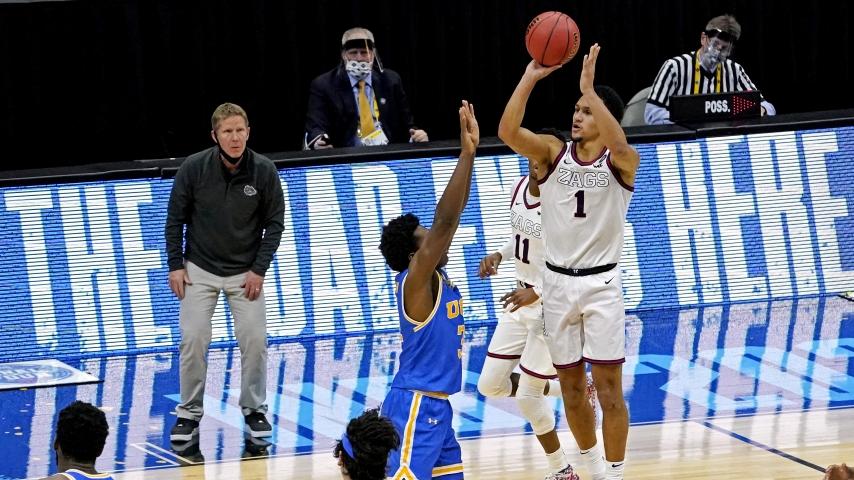 With 2:27 minutes left in the second half, Suggs made a fading turnaround jumper to tie the game at 77. Then, at the other end, UCLA junior Cody Riley was going up for a dunk when Suggs came out of nowhere to block it, and Suggs collected the rebound and led the break for the Bulldogs. Timme was running on the left wing and cut towards the basket when Suggs threw a laser bounce pass to hit Timme in stride, and made the game 79-77.

The Suggs story will include a signature unselfishness that became clear when Andrew Nembhard, a talented, experienced junior guard, wanted to transfer from the University of Georgia. Few sat down with Suggs to make sure the star recruit was okay with it. Suggs, who was the highest ranked recruit in program history, could have cared only about his touches, his shots, or his draft stock. That’s not what happened when Few convened with Suggs.

“I sat Jalen down and said, ‘Hey, what do you think about this? Are you all right with that?’” Few remembered recently. “He just got the biggest grin on his face. I’ll remember it the rest of my life. He was like, ‘Coach, are you kidding me? That would be awesome.’

MORE ON BAYLOR: 18 numbers on the Bears’ Final Four domination of Houston

“I’ve found over the years the real players, they don’t fear anybody,” Few said. “They welcome all great players around them.”

Nembhard has been impressed with the young star’s competitive nature and his desire to win. “The best part about Jalen is his competitive nature, how he rises to the moment, and it’s all about winning,” Nembhard said. “He shows that in his play and how he interacts with his teammates. He’s really mature for his age, and that’s what made him succeed so much.”

When asked after the Elite Eight why he had chosen Gonzaga, Suggs said the winning was the most important thing, but he did not want to feel like a cog in a machine. “I always talk about it,” he said. “It’s the family piece. I didn’t want to come and be another piece of the puzzle just so they could use me for these six, seven months, get wins, and kind of ship me off to the next part of my journey. From the day these guys started recruiting me, they were straight. They were up front. They treated me like I was one of their own honestly. Like I was part of their family from day one.”

On Saturday night, the group he chose had a moment they can share forever. “It’s things you dream about,” Suggs said. “When dreams start to become realities and you’re able to experience those things, it’s special. And those are things you’ve got to cherish. You’re never going to get another moment like this. You’ll never be able to relive this.”

In high school, in addition to being a prep basketball star, he was also a high school football star and was the first athlete in Minnesota history to win Mr. Football and Mr. Basketball in the same year. Suggs said earlier in the tournament he was glad he gave up football for basketball so he could be on a stage like this. Suggs played both sides of the ball, compiling 2,213 yards and passed for 25 touchdowns while running for 978 yards and scoring 12 with his feet, while intercepting nine passes and returning two of those for touchdowns.

MOP HONORS:  The 10 most outstanding players in the NCAA tournament since 2000, ranked

Until Saturday night, he felt his greatest achievement had been on a high school football field in Minnesota when he played for Minnehaha Academy. “I’ve always said a football game, section championship against Benilde-St. Margaret’s my senior year was my greatest sports moment I’ve been a part of,” Suggs said. “It skyrockets above that. I mean, it was nuts. And I still can’t speak. I have so many things going on in my head. I just can’t believe that happened.”

The Bulldogs can still hope to complete the first undefeated season since Indiana in 1976. They will become the first team to reach the championship game with a perfect record since Larry Bird’s 1979 Indiana State Sycamores. Gonzaga remains the first West Coast Conference team to remain undefeated in the Final Four since Bill Russell led San Francisco to an undefeated season in 1955-56. They had won each NCAA Tournament game by at least 16 points or more and have outscored their opponents on the season by about 19 points a game.

On Saturday night they survived, and Jalen Suggs revealed a dream that suddenly became reality, a moment that connected him with his heroes, Kobe Bryant and Dwyane Wade. “I’ve always wanted to run up on the table and like Kobe and D-Wade and go like that,” he said. “And that’s the first thing I did.”