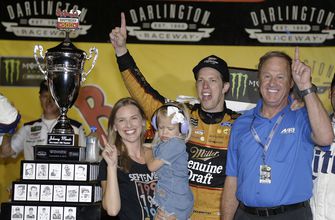 DARLINGTON, S.C. (AP) — Brad Keselowski took nearly the entire season to break through to victory lane. Kyle Larson will have to wait a little bit longer.

Keselowski overtook Larson’s dominant car by a few feet coming out of the pits on the final caution, then took off on the restart to win the Southern 500 — a satisfying moment in a season of struggles for the former NASCAR champion.

“That’s how this sport rolls,” said a smiling Keselowski. “That’s how life rolls. You’ve just got to keep pushing forward and make the most of the opportunities and know the breaks will come your way just as they fell against you previously. That’s part of the perseverance it takes to be successful.”

Larson knows all about perseverance. He had strongest car at Darlington on Sunday night, led a whopping 284 of 367 laps, yet left in third place behind Keselowski and his Team Penske teammate Joey Logano.

It was the eighth time this year — and 38th time in his five full-time Cup seasons — Larson finished in the top five without winning. Larson led 200 laps in Bristol’s spring race and wound up second after Kyle Busch’s textbook bump-and-run move five laps from the end last April.

Larson led 101 laps at Kansas a month later u ntil eventual winner Kevin Harvick got him on a restart and Larson’s Chip Ganassi Racing machine tangled with Ryan Blaney, costing him a shot at the win.

“I mean, this is my fifth Cup season, and I’ve run second or third a lot,” said the 26-year-old Larson. “I guess you get used to the disappointment or whatever you want to call it.”

Larson sat for his late-night media session mostly without emotion, putting the best spin on his latest close call. He was happy to lead so many laps, to have a fast car, to know that his team may have the power to contend in the playoffs, where Larson has already clinched a spot in the 16-team field.

” I feel like we’ve kind of been stale up until this weekend,” Larson said. “We had a (recent) good test at Richmond. We learned some things with some different components, and I felt like it really helped our car there.”

Next up comes the breakthrough to the checkered flag.

Keselowski understands how difficult it is to run up front and not have the win to show for it. He believes his Penske Ford was good enough to win several times this year until critical errors on his part ruined the chance.

When drivers don’t capitalize on those opportunities, it can lead to doubts about when they’ll come around again, Keselowski said.

“You just never know when you’re going to get a winning race car again,” he said. “You hope it’s every week. You enter every weekend thinking that. But you get to the race track and it’s not there, you think, what if I never get another car capable of winning.”

Keselowski recalls his early days in the Cup series when the machines he had were not capable of keeping up. When that changed, Keselowski’s career and confidence took off. “There’s almost a point in time you take that for granted,” the 34-year-old driver said. “You start to see that slip away and you think to yourself, ‘Oh, my God, this could be it.’”

That’s why the win at Darlington, he said, was so important and in his words, “refreshing.”

“They recharge your batteries so much because the season is such a death march, especially when things aren’t going well,” he explained.

Larson sounds like his batteries are still fully charged. He’s confident that if his team brings more cars to tracks like the one he had at Darlington, good things will happen. Keselowski sees that, too.

“Kyle Larson’s going to win this race one day,” Keselowski said. “And when that day comes, he’ll think about this one and how this one probably slipped away.”