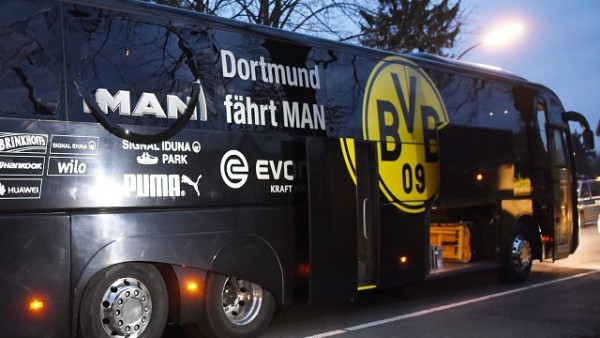 The Borussia Dortmund team bus was attacked by an explosive device hours before their Champions League game against Monaco. (Photo : The Guardian/YouTube)

Borussia Dortmund lost 3-2 to Monaco on Wednesday in the first leg of the UEFA Champions League quarterfinals less than 24 hours after an attack on their team bus. Dortmund players and manager lashed out on UEFA for their decision to not rescheduling the match at a later date.

Dortmund defender and Greece international Sokratis criticized UEFA for the way they treated them. He told ESPN FC that he is happy to be alive but he felt like an “animal” for going through what they went through. He added that they are human beings with feelings, families and children.

An explosion near the team bus on the way to the stadium on Tuesday left the whole Borussia Dortmund squad traumatized. Spanish defender Marc Bartra was the only one injured and he had to undergo surgery on his wrist and arms. However, UEFA ordered the club to get it together and face Monaco the next day, less than 24 hours after a couple of people tried to kill them.

Borussia Dortmund manager Thomas Tuchel had the same sentiment after their loss to Monaco. He told reporters after the game that they were ignored by UEFA. He noted that they only received a text message instructing them to play the next day after the attack.

“We were informed by text message that Uefa was making this decision. We would have liked more time to take stock. This gives you the feeling of impotence, that we have to keep functioning and nothing else matters,” Tuchel said, per The Guardian.

Borussia Dortmund midfielder Nuri Sahin also gave an emotional but powerful interview after the game. Sahin was fighting back tears when he recounted the incident, how he will never forget his teammates’ faces after the attack occurred.

The Turkey international added that he was not thinking about football when he was on the pitch. He said, “We are human beings and there is so much more than football in this world. Last night we felt it.”

German police have arrested a couple of suspects regarding the attack on the Borussia Dortmund team bus. The attack is still under investigation and the motivation for the attack is still not known at the moment. Dortmund is back in action on Saturday, April 15 against Eintracht Frankfurt at the Signal Iduna Park.