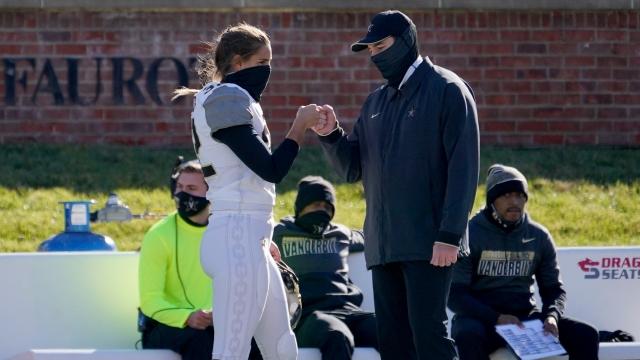 Before Sarah Fuller broke through national gender barriers, she first had to break through her own

Sarah Fuller. It’s a name many had never heard before; then it practically became a household name overnight. It’s a name that little girls will remember when tying up their laces on their cleats. It’s the name of the Vanderbilt soccer player who held the SEC championship trophy over her head on the pitch one day, and then made history on the football field the next week.

On display @cfbhall is the uniform of @VandyFootball kicker @SarahFuller_27; who made history as the first female to play and score in a Power 5 college football game. Congrats Sarah and thank you for entrusting us with the safe keeping of this rich piece of history! #AnchorDown pic.twitter.com/Dy79gJJnZ6

Seems like a fairytale right? It’s certainly more than any college soccer player could expect to achieve. But many might not know everything that Sarah Fuller endured to get to where she is.

It was a journey filled with struggles.

It started her freshman year at Vanderbilt when she broke her foot. Fuller admitted she immediately had a bad attitude about it. She was frustrated, angry at the world, felt depressed. It wasn’t easy adapting to Vanderbilt’s rigorous academic demands, even as a straight-A student in high school. It wasn’t what she had envisioned for her first season.

Her foot fully recovered, she was ready for her sophomore season.

Then, she was set back again with a slipped disk in her back. She could train, but with a lot of pain. Week after week, she waited to hear if she would travel with the team. “You’re going to have to sit this one out,” became all too common for Fuller.

Then her junior year came. Fuller made a decision to change her mentality. It wasn’t about her and it wasn’t about her personal performance, but it was about the team. There were two senior goalkeepers that split playing time, and they became important mentors for Sarah. Her attitude had a completely new focus: “I might not play again this season, but at least I can make my team better and I can make myself better for next year.”

Fast forward to her senior year. Sarah is healthy and feeling fit, but was most likely overtraining. She got a stress fracture in her other foot. She hoped she could recover quickly, but it set her back in her fitness and her confidence. Fuller said she had always struggled with the team’s fitness test and she had acquired something of a mental block. She would be doing her fifth or sixth fitness test while watching her teammates train.

Finally, she passed. Four games into the season, she was called up for that starting job. She never looked back.

“I have worked my whole life to be an SEC champion,” Fuller said. She is still most proud of that even with the history she has made.

HISTORY: More on Sarah Fuller and the historic football game

Former Vanderbilt football head coach Derek Mason didn’t call Sarah directly. She had a missed call from her assistant soccer coach. The soccer season was temporarily over, so Fuller’s first thought was, “Oh no, what did I do?”

Instead, he said, “The football team needs a kicker, would you be willing to come out and try to kick for them?”

Her roommate and boyfriend were in the room when she got the call. What she told them when she hung up was the absolute last thing they expected. Fuller then called her parents, who were driving back from Orange Beach from the SEC tournament. She said, “I should do this right?” Her parents said, “Yes, you should do it.”

She got out there with the football team, took a few kicks, and they were happy with it. She met the rest of the staff. She joined the team.

Football is completely dominated by men, we all know that. It is not common to see a woman fully suited up in pads on the field. On her first real day of practice, the guys were a little hesitant. But it wasn’t for the reason that you might expect. It wasn’t because she was a girl. Instead, Fuller said it was because they wanted to know if she would be able to do the job. That was the biggest thing.

“When I got out there, and I made two field goals, they were like, OK, and we started to high five, and I became a part of the team,” Fuller said. “I think at the end of the day, it doesn’t matter who you are, it’s if you can do the job. That’s what matters.”

Fuller never knew or expected this to turn into something so big. In fact, when she was first asked to kick, there was a split second where she considered saying no because she wanted to go home over break and see her dogs. She quickly knew how cool of an opportunity this was, and now she feels the gravity of what she has done.

To all the little girls she inspired, Fuller said, “They can do anything they set their mind to. But I also just want to emphasize that it’s not always going to be easy. There’s going to be ups and downs and the willingness to fight through the downs and cherish the ups, I think is really important. So just keep fighting and keep working hard and keep working towards your goals.”

There is one more thing Fuller wanted to make clear.

“It used to be an insult, like ‘Oh, you play like a girl’, and I wanted to turn that on its head and say, no, that’s actually a huge compliment to play like a girl. We’ve fought through so many things. And we’re showing up,” Fuller said. “Now we’re breaking down these barriers and I want to make that clear.”

Tomorrow I will be wearing “Play Like a Girl” on the back of my helmet. @iplaylikeagirl is nonprofit that encourages girls to play sports and get exposure to STEM opportunities. Check them out! #playlikeagirl https://t.co/2inXh5PM2V pic.twitter.com/W7lF9dXkUR

There are people who say she had no place being on that football field. That it was a publicity stunt. Fuller doesn’t care. She has someone else read the comments on her social media.

“It’s just a waste of my time,” she said. “I worked hard to be where I am and I was in the right spot at the right time to be called up onto the football team and I have been working really hard to perform for them, so at the end of the day, I don’t care what the negative is.”

The positive response has been overwhelming. Some of Fuller’s favorites include hearing from Dallas Cowboys quarterback Dak Prescott (Fuller is a big Cowboys fan). She also heard from LeBron James and U.S. Women’s National Team standout Carli Lloyd. The list goes on.

What are Fuller’s thoughts on getting so much media attention?

“Women in sports deserve this amount of coverage,” Fuller said. “If I can go back to the SEC tournament and just boast how incredible our team played. That was good soccer. That is good entertaining soccer. It would be amazing if we could get more coverage and more attention because those women work so hard for what they do.”

As for Fuller, she trains and prepares the same way for football as she would for soccer, and honestly, she doesn’t think there is a big difference from a women’s team to a men’s team. At the end of the day, they’re all working together to reach a common goal. Sarah grew up playing with guys her entire life. To her, it doesn’t matter who you are.

Fuller plans to graduate from Vanderbilt in May with an undergraduate degree in medicine, health and society. Because of their SEC Championship, her soccer team will have an automatic bid to the NCAA tournament.

After that, Fuller has committed to the University of North Texas where she plans to use her remaining two years of eligibility (from her redshirt freshman year, and COVID-19 extra year) to pursue a master’s degree in hospital administration. Fuller also has some interest in the National Women’s Soccer League.

She smiled as she discussed what lies ahead, remembering the work and sacrifice she has put in, and what might be next for the now legend in women’s and men’s sports, Sarah Fuller.