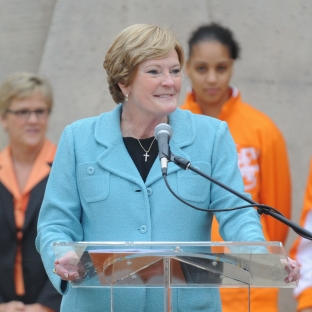 One year ago today, the world of women’s college basketball lost an icon — Pat Summit. Fans and colleagues took to social media on Wednesday to reminisce and express their feelings about the late Tennessee women’s basketball coach.

RELATED: Tennessee not alone in honoring Pat Summitt |  A look back at Pat Summitt

The longtime coach of the Tennessee Volunteers left her mark on the game not only with her performance on the hardwood, but also through her demeanor and poise off of it as well.

Her legacy extends far beyond the end of her coaching days. Take a look at Summitt’s coaching tree HERE . Read on below for a collection of tweets on the one-year anniversary of Summitt’s passing.

Rest in peace to a true inspiration… pic.twitter.com/zGORMTx7oX


On the 1 year anniversary of Pat Summitt’s passing, @Candace_Parker and @Catchin24 remember their friend and mentor. pic.twitter.com/A3VJMNv7HX


Pat Summitt’s former player explains the impact the coach had on her. @BojorquezCBS on reaction to Summitt’s death pic.twitter.com/OLDCpqPf5G

Grateful for what you stood for, your example of courage and for the impact you continue to have on so many people. #ThanksPat pic.twitter.com/iLvZX2twrY

What else is there to say? #ThanksPat. We miss you. pic.twitter.com/YdtxR4mATq