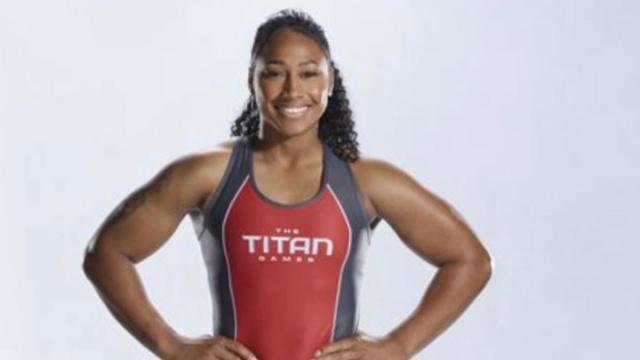 
See the woman 25 feet in the air, straining against a moving wall, fighting with her last ounce of energy not to be pushed off a ledge?

Now there’s a dicey situation you don’t see every day for a basketball referee. But no, that’s not an angry coach on the other side of the wall doing the pushing, eager to send Nadi Carey off the ledge. Carey is slowly retreating back despite her frantic efforts, to the very brink. And then . . .

First, maybe we need to explain how she got up there.

Welcome to The Titan Games, an NBC series where the stars are — as host Dwyane (you know him better as The Rock) Johnson tells the audience —  “Everyday people willing to push themselves to their limits.”

That would be 36 contestants chosen from thousands of candidates — 18 men, 18 women — going against one another, until the last survivor in each gender has a chance to be a Titan, not to mention take home $100,000. This year’s series included, among others, an opera singer, a middle school social studies teacher, a home school mom . . . and a basketball official from the Big Sky conference. That’d be Nadi Carey, and it wasn’t even her idea to be on the show.

Her aunt Latoya McCord watched the series last season, and thought it’d be a fine idea if her niece applied. After all, Nadi was a competitor. She used to whip up on her brother in family basketball games. Her brother Ka’Deem, a future Arizona All-American running back who would one day play in the NFL. She was a winner; a high school basketball state champion, a guard for the Pima College team that advanced to the NJCAA title game. She was a worker, spending several years as a firefighter, and taking up officiating, quickly working her way to Division I women’s basketball at the age of 27.

And one look at Nadi could tell anyone she was in shape. She seemed perfect for the show, so Latoya took the idea to her niece, whose answer was immediate.

“I hadn’t competed since college basketball,” she says now. “I had a little bit of doubt in myself.”

But Aunt Latoya wasn’t taking no for an answer. She sent in the application herself. Weeks later, an email from NBC showed up in Nadi’s box, inviting her to try out. After a quick call to her aunt — You did whattttt? — she decided to give it a try. A Skype interview whittled the field down to 60, and Nadi was invited to Los Angeles in early January for the Titan combine, a series of tests including an obstacle course, three-minute push-up count, weightlifting, treadmill running. A semi hell week. To prepare, she worked out with a trainer at 5:30 most mornings.

Meanwhile, she still had a busy officiating schedule in high school, junior college and the Big Sky. It was as if there were two Nadi Careys. “That’s exactly what it was like,” she says now. “I remember thinking, `Wow, I’m in referee mode, I’m not in competing mode.’ So I had to change gears where I had to do both.”

She made it through the combine, then went back to officiating. One day she was deadlifting 425 pounds in front of TV folks, a few days later she was working a Big Sky game at Portland State. The weeks went by, she heard nothing. She figured she’d missed the cut.

But then the phone rang Jan. 28, and they wanted her in Atlanta Feb. 4 to be in The Titan Games. Might take two weeks. “I was in pure shock,” she says. Also in a bit of a quandary, since a basketball official is kind of busy in February. What would her game assigners think?

“Everybody was really cool about it. They said, `It’s a once-in-a-lifetime opportunity. You’re only going to miss a couple of games. This is a great opportunity for you to go out there and represent referees and officials all over the world, and show them that we are strong and we’re in shape and we’re athletic. Go do it.’

Which takes us back to her perilous position in the June 1 episode; a 29-year-old woman trying to stay on a ledge 25 feet in the air.

She was going against Dani Speegle, a CrossFit trainer who said she has 40,000 followers on Instagram, and looks as if she could body slam a stallion. The competition was best two-out-three. First event was something called Nuts and Bolts, where each woman had to start pulling 1200 pounds worth of weights off a wall, until she could pull the wall down. Speegle won that.

That meant it was win-or-else for Carey on the Lunar Impact. Each woman raced up ladders to the elevated curved ledge and began pushing a wall, to force the other off — they’re attached by a wire so they don’t actually fall. Speegle got the better of it at first, pushing Carey toward her end, Carey regrouped and moved Speegle back. It seemed to go on for ages, more than three minutes of air time. But turns out the battle was even fiercer than that.

“One thing they don’t show you is, we beat the Titan record,” Carey says now. “We were up there for over 22 minutes, going back and forth. It was so bad, the guys right before us, they were up there for 13 minutes and when they got off-set, they were throwing up, they were on the floor about to pass out. They were saying `That’s the worst thing I’ve ever done in my life.’ I’m hearing all this stuff and I’m about to do it.”

Bottom line, in the end, Speegle won. A last push, and Nadi Carey’s show was over, but not before one heck of a fight.

The Rock marched over to Carey for a congratulatory hug for her efforts – this was all taped pre-social distancing, remember — while several of her support group cheered from the audience, including her parents and Aunt Latoya. “Will you say hi to my family real quick? It would mean a lot,” she asked The Rock, who promptly did.

Soon after, she was on a flight to work the Montana State-Idaho State. From a network set in Atlanta straight to Pocatello, Idaho. “I felt like Clark Kent with Superman,” she says. “I have to be here and perform this way, and then once I’m done, I’ve got to rip off the Titan gear and put on the referee gear. It definitely felt like I had an alter ego thing going on.”

Her Achilles tendon hurt, from trying to stop that wall. Her body ached, head to toe. She showed up in Idaho for the game, and who should be there to watch but Marla Denham, Big Sky coordinator of officials. “I thought, oh man, my first game back and the boss is here.”

But the game went well for Carey, the season eventually came to its pandemic-battered end, and she went back to her day job as a personal trainer in Tucson. Then came June 1, and episode three of The Titan Games. She started hearing from everywhere, as people watched it. But she kept her TV off.

“I’ll be honest with you, I didn’t watch it. I’m so competitive that when I lost, it really hurt me. I want to relive it but I don’t want to relive losing,” she said, sounding very much like the coach who avoids looking at tapes of past painful defeats.

That fiery competitiveness used to make her a handful as a basketball player, and often led to some conflict with those blowing the whistles. Matter of fact, this is what she said on the air on The Titan Games when she was asked about her officiating.

“As a basketball player I hated referees. I just felt like they were after me. I thought my physicality as a player was too much for them. I just wished they weren’t part of the game.”

So imagine the moment she attended her first pre-season junior college officials’ meeting as a new referee.

“I guess I was a problem child, I really didn’t know,” she said this week. “Because when I walked into the room, all the referees who had ever reffed me were in that room. Their mouths dropped. They just looked at me, they had no words. I kind of broke the ice, when you had to go around the room and introduce yourself. I said `Hi, I’m Nadi Carey, and as you guys know, I hated refs. So I became one.’

“You don’t realize how hard it is to be an official when you’re a player .  . . how good they had to be to ref me. Because I was aggressive, I played defense aggressive, you had to watch me. It took being a referee to understand just how hard the job is.”

Next season, she will be the only referee in Division I who deadlifted 425 pounds to get herself selected for a television show. Her moment on The Titan Games gave her a lot, including a reminder of how much physical fitness can help an official.

“I kid you not, at least one player a game will come up and say `Dang ref, you’re built, dang ref, you’re solid.’ You name it, they will say it. They don’t care, they’re players. I think your presentation and the way you look is just the first battle. If you look the part, if you’re in shape, if you look like you know what you’re doing, you’re going automatically to get that little respect you wouldn’t haven’t gotten if you didn’t have those things going for you.”

So Aunt Latoya had it right?

“From The Titan Games, I took that as long as you have faith in God and faith in yourself, you can do anything. At the beginning I was really nervous, I didn’t know I had the competitiveness mindset in me still. When I went to the combine I ended up deadlifting 425 pounds, and I realized I still had a little left in me. I can do this.”