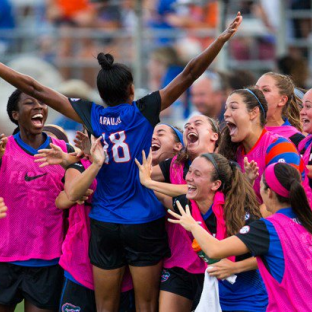 Who says madness belongs to March?

The first action-packed weekend of fall sports season began with chaos, as preseason rankings set just weeks ago came tumbling down like dominoes.

Three separate No. 1-ranked teams fell in a 24-hour span, kicking off with a pair of wins for Florida squads on Friday evening and continuing Saturday with Michigan field hockey’s 3-2 win over No. 1 North Carolina.

It began with the No. 12-ranked Gators women’s volleyball team toppling No. 1 Texas in four sets.

It was a night to remember as Florida beats #1 Texas! pic.twitter.com/34FycLa5x1

Senior outside hitter Carli Snyder dictated the season-opening match for Florida, bagging six aces in the game, a new career high. She also recorded her first double-double of the season with 20 digs and 14 kills in an all-around dominant performance.

Elsewhere in Gainesville, the No. 8-ranked women’s soccer team knocked off No. 1-ranked Stanford 3-2 in a scintillating match.

After trailing or being tied for the first 82 minutes, Laís Araujo used the woodwork and potted a goal to put the Gators up by one with just eight minutes to go, a mark that would prove decisive. It was Florida’s first win ever against Stanford, and it couldn’t have come in more dramatic fashion.

And to cap things off Saturday afternoon, Michigan got in on the top-team-toppling action. The Wolverines, ranked No. 11 in the country, took down No. 1 North Carolina — for the second straight year — in a 3-2 win in Iowa City.

After a scoreless first half, Michigan scored twice in 61 seconds to start the second half and take a 2-0 lead. The Wolverines scored again eight minutes later, and then managed to fend off the Tar Heels despite UNC out-shooting Michigan, 23-5.

The remaining No. 1-ranked team yet to play this weekend, West Virginia women’s soccer team, plays Sunday against Duquesne University. Considering Duquesne isn’t ranked, and the three teams to take down top-ranked squads this weekend were, odds are good West Virginia will survive.

But this weekend is apparently sparing no elite teams, so don’t count the Dukes out just yet.