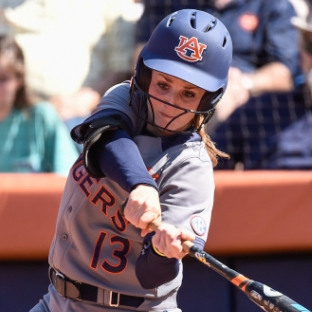 AUBURN — With tears flowing down her cheeks, Kasey Cooper surprised practically nobody by having very little to say about her Auburn softball career.

“I’m glad I came to Auburn,” Cooper said while fighting back the emotion to cry. “That’s all I got.”

Cooper ended her collegiate softball career as a a three-time All-America selection and as the Southeastern Conference’s all-time career RBI leader with 269. However, the only number that truly mattered to her was the 5-2 score that Oklahoma left Jane B. Moore Field with to clinch a two-gamer sweep in the NCAA Auburn Super Regional in Saturday.

“Yesterday they had the two-out hits when they needed to and we didn’t, and today they out hit us,” Cooper said. “They won in every column so shout out to them, they beat us.”

Cooper was a major part of the first recruiting class Clint Myers produced after his move from Arizona State to Auburn and while the former national champion coach attempted to embark on a culture change in the Tigers softball program.

Congratulations to @Kasey_Cooper13 for being named an Academic All-American for the 3rd straight year!

“I remember the first time the coaches came in and they said, ‘we’re going to the College World Series,” and we all laughed,” Cooper said when she was asked about her legacy at Auburn. Everybody was like, you’re crazy, you guys are all psycho, which probably a lot of people still say they’re psycho. But they got us to where we are. We expect to be great.”

And great was exactly what Cooper was in her four years at Auburn. The Tigers third baseman left Jane B. Moore Field Saturday knowing she was the program record holder in career home runs (67) and held the second spot all-time in career batting average, hits and on-base percentage. In the simplest of terms, Kasey Cooper took off her Auburn jersey knowing she was one of the school’s most prolific athletes of all-time after being a major contributor to three straight NCAA Super Regional appearances and two trips to the Women’s College World Series.

“When we started four years ago, we said we have to start a tradition, we have to create a legacy,” Myers said. “And if you saw a sign that’s on the press box, (it says) the road to OKC goes through Jane B. Moore Field.”

Cooper, who had one of the two run-producing hits of the Super Regional Game 2 loss to Oklahoma Saturday, was able to turn a fledgling program into a softball powerhouse that sold out season tickets before the first pitch of the season opener this season and forced the program to build temporary stands in the outfield to accommodate the Super Regional crowds.

The Tigers battled until the very end, but their season comes to a close.#WarEagle pic.twitter.com/p8B6BY6nOF

“When I grew up, the biggest program in Alabama was Alabama. Everybody wanted to go to Bama. And now, girls are starting to come to Auburn. They’re like, ‘I want to come to Auburn, I want to play under Clint,” Cooper said. “I’m very proud of where this program has gone, its grown a lot.”

Myers stressed in the post-game press conference that his program is primed to receiving a major boost from a 2017 recruiting class filled with potential starters in next season’s everyday lineup. After watching his team struggle against elite pitching all season, the fourth-year head coach had a simple diagnosis for the team’s resurgence back to the Women’s College World Series in Oklahoma City.

By recruiting and signing Cooper among a class of Haley Fagan, Jenna Abbott and Sydne Waldrop and Madi Gipso, Auburn is set to do just that — have a consistently nationally relevant program.

This article is written by Matthew Stevens from The Montgomery Advertiser and was legally licensed via the Tribune Content Agency through the NewsCred publisher network. Please direct all licensing questions to legal@newscred.com.