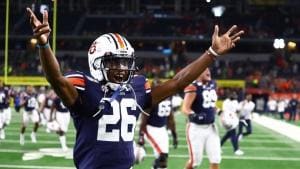 
Oregon had it. The Pac-12 had it. But No. 16 Auburn’s freshman quarterback Bo Nix intervened and led the path to resilience for a 27-21 victory over No. 11 Oregon. The Ducks are left shaken, after much of the game pointed toward an uplifting victory.

Shocked, as most were Saturday night, Nix led the Tigers on an 11-play, 60-yard game-winning touchdown drive, including a crucial 4th-and-3 conversion at midfield. At the 39-yard line with 16 seconds left, Auburn coach Gus Malzahn could’ve settled for a long field goal. Entrusting his freshman quarterback seemed too risky. But Malzahn never hesitated. He thrusted Nix into fire, and the quarterback came out glittery-eyed and drenched in Gatorade.

AUBURN WITH THE GAME-WINNER!
(📍 @WellsFargo) pic.twitter.com/fAluPd2WkP

The 26-yard touchdown reception by Sam Williams with nine seconds left secured the victory for Auburn, who trailed by as much as 15 points in the third quarter.

Saturday’s matchup in Arlington was the two programs’ first head-to-head meeting since Jan. 10, 2011, when Auburn and Oregon met in Glendale, Arizona, for the 2011 BCS National Championship. The Tigers traveled west to secure a 22-19 victory, clinched by a game-winning field goal with time expiring.

Recent history against the SEC has not treated the Pac-12 well. The SEC is 11-4 in matchups since 2010. Last September, unranked Auburn beat then-No. 13 Washington 21-16 at a neutral site in Atlanta. Two years prior in 2016, then-No. 2 Alabama manhandled then-No. 3 Southern California, 52-6, during the season’s first top-3 matchup.

Who best to call for the change of times than Justin Herbert? The four-year starting quarterback entered Saturday with a 7-1 record against non-conference opponents.

In comparison to Nix, who finished 13-of-31 with 177 yards, two touchdowns and two interceptions, Herbert performed at a higher level statistically, completing 28-of-37 passes for 242 yards and one touchdown. But when it mattered most under pressure, Nix performed far beyond what his youthful age infers.

With him, the Tigers have a prosperous future ahead, though they endure a tough draw in the SEC, sharing the West division with No. 1 Alabama, No. 6 LSU and No. 12 Texas A&M. Nix proved trustworthy when throwing downfield; his arm’s powerful enough to handle air-raid-inspired calls.

To put into perspective, the SEC has outrun other conferences recently, earning 10 of the last 15 national titles. Oregon can still stay in the CFP conversation, but every game from here on out could be a must-win.

The Ducks have more key opponents to face before December, and all three are currently ranked: No. 25 Stanford, No. 13 Washington and No. 23 Washington State. A run through a respectable conference schedule and a win in the Pac-12 title game on Dec. 6 could land the Ducks their first CFP berth since 2014.

As the Oregon Ducks planned for a rematch of 2011’s title game — and the second matchup in NCAA history — mounds of questions piled up, including:

Herbert utilized the strengths of his receivers. Take the Ducks’ second touchdown of the night. Herbert evaded Auburn’s pressure outside the pocket and placed the ball only reachable for 6-foot-6 tight end Spencer Webb 6-foot-6.

HE GOT MOSSED!@oregonfootball‘s Spencer Webb went way up over the defender for this TD catch 😤 pic.twitter.com/druS3bV4A3

But when all looked grand for the Ducks, Auburn’s heavily-touted defense showed up, halting any progressive drives the Herbert and the Oregon offense mustered up.