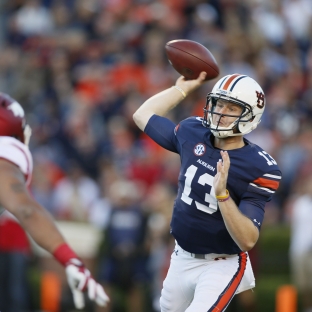 AUBURN, Ala. — Auburn coach Gus Malzahn boils his latest quarterback battle down to one determining factor: Who gives the Tigers the best chance to win?

While former Baylor starter Jarrett Stidham seems like the front-runner, Malzahn hasn’t counted out incumbent Sean White. Either way, the Tigers are banking on improved quarterback play after dropping 16 games over the last three seasons.

“It’s a good competition and there’s nothing better than competition,” Malzahn said after Monday’s first practice of fall camp. “It just brings out the best in everybody. That’s a really good thing right now, I think.”

It’s the third straight year Auburn has carried a quarterback competition into preseason camp. This time, the Tigers have two experienced passers vying for the job.

Stidham played in 10 games with Baylor as a freshman in 2015 before spending last season at a junior college with no football program. White has started 16 games the past two years, winning nine, while dealing with injuries.

His career passing efficiency rating and completion percentage currently rank third in Auburn history, so there figures to be a capable backup, which wasn’t the case last season.

“We have confidence in both of those guys,” center Austin Golson said. “They’re both really good players. I know that whichever one goes out there, the backup’s right behind him and he’s going to be just as good or be able to provide if we need him.”

Malzahn doesn’t foresee a scenario where he’ll let the quarterbacks go live in a scrimmage like he did with Nick Marshall in 2013. He said it only took one series where quarterbacks could get hit to let the team know Marshall was the guy.

Malzahn and new offensive coordinator Chip Lindsey have a solid sample of game tape to give them a better idea of what both contenders can do beyond practice.

“It’s completely different now because we’ve got more information than we had then,” Malzahn said.

The offense also has competition at receiver and both guard spots. Graduate transfer Wilson Bell joins the mix at guard after starting 18 games at Florida State, including five last season.

Sophomore Kyle Davis is back after missing the spring for personal reasons. Malzahn thinks it’s the best offensive depth Auburn has had in recent years.

“This first probably two weeks, offense is going to be some great competition and then really feel like things will start to settle in after that two-week mark,” he said. “That’s kind of the plan. But overall, there’s a bunch of guys out there that are in the mix for playing time.”