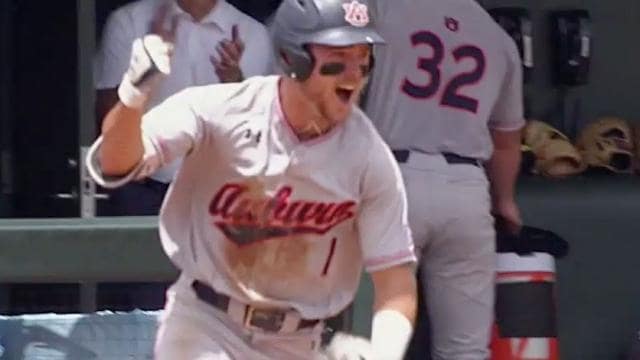 
CHAPEL HILL, N.C. — Almost exactly one year ago, and about 560 miles south in Gainesville, Florida, Auburn could only watch, stunned, as Florida celebrated Austin Langworthy’s walk-off home run in Game 3 of a super regional.

It was a ball belted off a Cody Greenhill pitch. A ball that bounced off Steven Williams’ outstretched glove and over the right-field wall. A ball that sent the Gators back to the College World Series and the Tigers back home to the Plains, their season over.

It was a moment that many people close to Auburn might rather forget. Butch Thompson isn’t one of them. “Once you start seeing examples of perseverance — and sometimes it takes a year to manifest itself — then all of that experience starts playing out,” the fourth-year head coach said.

The Tigers are headed to the College World Series for the fifth time in program history and first time since 1997!!!#WarEagle | #RoadToOmaha pic.twitter.com/N80S1VQGJF

Greenhill, Williams and the rest of the Tigers persevered through that heartbreak. They survived the toughest regular-season schedule in the country to make it back to the NCAA Tournament. They swept another regional. They got themselves back within one win of taking a super regional.

And this time, they got that win. A 14-7 blowout of North Carolina in a winner-take-all Game 3 on Monday at its home stadium, Boshamer Stadium in Chapel Hill. They scored 13 runs in the first inning alone. The nerves, the tension, the fear of a season being over — all of it was gone within an hour of first pitch.

Auburn is going to the College World Series for the first time since 1997. It will face SEC foe Mississippi State in the first game of the eight-team, double-elimination tournament, which begins Saturday at TD Ameritrade Park in Omaha, Nebraska.

“A special day for our baseball program. A lot of folks, any coach or player that has ever put on this Auburn uniform, this is for you,” said Thompson, whose only other trip to the College World Series was as an assistant coach for Mississippi State in 2013.

“I’m just glad these boys — they believed in Auburn before we could show them Omaha and show them a college World Series. These young men believed it could happen, and they made it happen.”

This never really felt like a plausible outcome for this Auburn team this season. Not when it stumbled to a 12-21 finish to the regular season after a 20-2 start; not after it lost opening day starter Davis Daniel to Tommy John surgery and dealt with fellow starters Jack Owen and Tanner Burns missing significant time due to injury; and certainly not with top hitters Williams, Edouard Julien and Will Holland mired in seemingly season-long slumps.

But when the Tigers were the last team announced as part of the 64-team NCAA Tournament field — a result of the order in which the bracket was revealed, not their resume — Thompson said he was “good with the casual fan throwing this team away,” that the people doing that didn’t truly understand the rigors of playing baseball in the SEC.

THE 2️⃣2️⃣ YEAR DROUGHT IS OVER!

Because once Auburn stopped playing teams from a conference that produced 10 NCAA Tournament teams, six national seeds and four of the eight College World Series entrants, so many of those struggles seemed to melt away.

“I think the biggest thing for us was not panicking,” junior designated hitter Conor Davis said. “We knew what we had, we knew what we were capable of. The coaches kept us consistent, mindset-wise, and not panicking, not freaking out about anything. We knew that we had what we need to get to where we wanted to go, so we just kept being positive even through the lows of this season. We were trying to keep climbing no matter what.”

The Tigers opened play in the Atlanta Regional by scoring 16 runs against Sun Belt champion Coastal Carolina, and that was after scoring only 15 runs combined in their final five SEC games. Williams hit a three-run home run in that game and another with two outs in the bottom of the ninth inning in a walk-off win against Georgia Tech the next day. Richard Fitts and Bailey Horn — two first-year pitchers who struggled through the season — threw six scoreless innings each during a three-game sweep at Russ Chandler Stadium.

THE BEST OF THE BEST: We picked the all-time College World Series starting lineup

In Chapel Hill, Auburn trailed Game 1 of a super regional 5-2 with one out in the eighth inning, then erupted for nine runs thanks in part to a go-ahead three-run double from Rankin Woley and three-run home from Julien. It got shut out, 2-0, in Game 2, then vented all that frustration before the Tar Heels even came to the plate in Game 3.

The first four batters walked. Julien, Holland, Kason Howell, Woley, Julien (again) and Matt Scheffler hit RBI singles. Judd Ward hit a three-run home run. North Carolina made four pitching changes. The 13 runs were the most the Tigers have scored in a single inning since they scored 14 in an April 2000 win over Mercer and second-most ever for any team in an NCAA Tournament game.

For the first time since 1997, @AuburnBaseball is headed to the College World Series!

Get your CWS gear while it’s still available!

The nearly three hours that passed between the end of that first inning and the end of the game did nothing to dampen the enthusiasm of the celebration. The team dog-piled in front of home plate after Greenhill got the final out on the mound. The put on their “OMAHA BOUND” hats, hugged one another, posed for pictures and let out a “War Eagle!” chant for the ESPN camera on the field capturing it all.

CWS MOPs: The complete guide to every College World Series Most Outstanding Player

“I’ve never felt this feeling before,” Williams said. “I won a few state championships in high school, but that does not compare to this at all. We’ve been through so much this year. People definitely didn’t think we’d be in this situation right now. I’m just so proud of every single one of these guys on the team. It’s an unbelievable feeling.”

Auburn has played for reasons bigger than baseball this postseason. It has played for the people affected by the March 3 tornado that ripped through the southern part of Lee County. For Auburn police officer William Buechner Jr., who died in the line of duty on May 19. For Rod and Paula Bramblett, the longtime voice of the Auburn Tigers and his wife, who died from injuries suffered in a car accident on June 1.

There are 297 D-1 college baseball teams.

4 of those are from the SEC. pic.twitter.com/l9AaxnM37A

But on Monday, the Tigers did something for themselves. They completed the climb all the way back from last season’s heartbreak in Gainesville. They persevered through a season of struggles.

And for the first time since 1997, they’re going to the College World Series.

“If you’ve ever coached and you’re in games where it’s about to end it’s amazing what runs through your mind,” Thompson said. “I was talking to Rod and Paula Bramblett, who we’ve lost recently, ‘Rod, can you help me with that last out?’ I lost my dad since last year. We’ve had tornadoes in Lee County that claimed 23 lives this year. Officer (William) Buechner lost his life in the line of duty. It’s just been a little bit more than extra, because I know things happen with every program, but we’ve been especially hit a little bit.

“To see the perseverance and these young men rally around one another, I am proud to be their coach.”

This article is written by Josh Vitale from The Montgomery Advertiser and was legally licensed via the Tribune Content Agency through the NewsCred publisher network. Please direct all licensing questions to legal@newscred.com.