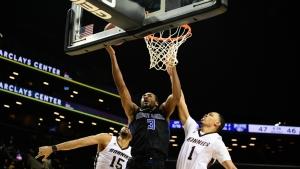 
NEWPORT NEWS, Va. – The 2019-20 Atlantic 10 Conference men’s basketball schedule will feature 85 nationally televised games on the league’s four media partners: ESPN, CBS Sports, NBCSN and Stadium. Those broadcasts provide 160 appearances for A-10 teams. The A-10 announced the conference schedule and TV selections for the upcoming season Wednesday. Through its robust television package and all-encompassing digital agreement with ESPN+, every home game for all 14 league members will be available on TV or digitally.

A full version of the schedule can be viewed here.

The 2019-20 conference schedule tips off on Thursday, Jan. 2 with four games, including a nationally-televised contest featuring Dayton at La Salle on CBS Sports Network. Through the course of league play, there will be 64 televised games, in addition to 10 televised non-conference games as part of the A-10 package. Each of the league’s 14 teams will make at least three appearances on national TV, and every league game will be televised on the weekend of Jan. 17-19 and the weekend of Feb. 14-16.

Additionally, 11 games of the 2020 Atlantic 10 Men’s Basketball Championship at Barclays Center will be nationally broadcast with the opening round games on March 11 carried digitally on ESPN+, the leading direct-to-consumer sports streaming service. NBCSN will carry the second round and the quarterfinals, March 12-13, and CBS Sports Network will air the semifinal games on March 14. CBS Television Network will broadcast the March 15 final at 1:00 pm ET for the 11th straight year as part of the network’s overall Selection Sunday coverage. The championship will again be played at the iconic Brooklyn, N.Y. arena for the sixth time.

LIGHTS, CAMERA, ACTION: 21 most entertaining college basketball players to look for next season

For the fifth straight year, ESPN and the Atlantic 10 will once again present A-10 Friday Night Showcase, featuring seven Friday primetime conference games and one non-conference game. The seven league games begin with Dayton at Saint Louis on Jan. 17, and feature six different Atlantic 10 programs. In total, there will be 14 regular season games across ESPN networks, with 10 conference matchups and four non-league games. All A-10 games across ESPN networks will also be available via the ESPN App, accessible on computers, smartphones, tablets and connected devices to fans who receive their video subscription from an affiliated provider

200 DAYS OUT: Take a look at Andy Katz’s latest Power 36 rankings with 200 days ’til Selection Sunday

NBCSN’s A-10 schedule will again feature 33 total games, of which 20 are conference matchups, and five are non-conference games. NBCSN will also carry eight A-10 Championship games, airing the second round and quarterfinals. The network opens its Atlantic 10 slate with a tripleheader on Sunday, Jan. 5. Through the course of league play, there will be four doubleheaders and three tripleheaders on NBCSN. All A-10 games on NBCSN will also be streamed on NBCSports.com and the NBC Sports app.

Stadium will carry 10 Atlantic 10 games, all during conference play, through its nationwide network of affiliates. The Stadium coverage begins Wednesday, Jan. 8 with St. Bonaventure at George Mason. All 10 Stadium television games will be carried digitally on WatchStadium.com.

Additional regional and local television coverage will be announced at a later date. All games not carried as part of the A-10’s national television package will be streamed through the Atlantic 10’s partnership with ESPN+.

This season marks the seventh year of the long-term television agreement between the A-10 and ESPN, CBS Sports Network and NBCSN, and the third year of the Stadium partnership. Atlantic 10 institutions reside in states that comprise 33.3 million television households, approximately 30 percent of the total national media market. There are nine A-10 institutions in or adjacent to the top 25 media markets in the country.